Norwalk Magazine Debuts for the Holiday 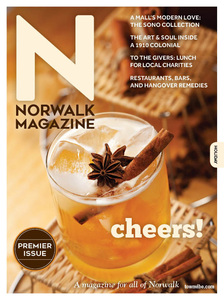 TownVibe has launched Norwalk Magazine, an upscale, bimonthly lifestyle publication: a magazine for all of Norwalk.

The beautifully designed, professionally edited magazine premiers with its Holiday 2019 issue, reaching mailboxes before Thanksgiving and on newsstands December 2. The launch has been in the works for six months. Topics in the first issue include:

The magazine will mail to 15,000 homes in various Norwalk neighborhoods, including 2,500 copies to Darien and New Canaan neighborhoods that border Norwalk. Says TownVibe editor-in-chief Geoffrey Morris, who edited the launch issue: “Norwalk is more than a city of neighborhoods. It’s a connected community with soul. Norwalk Magazine will reveal Norwalk’s true character—from nightlife culture in SoNo and the waterfront town of Rowayton, to art in Silvermine, the East Norwalk coastline, the gentrification of Wall Street, and the interesting personalities and organizations that make Norwalk thrive.”

Founded in 2002 by editor and publisher Geoffrey Morris, the company has earned plaudits from readers and awards from numerous organizations for its quality design, editorial, and creativity.