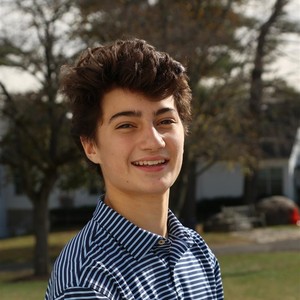 “I have loved football since I was three years old,” explained Rett Zeigler, a co-captain of New Canaan Country School’s varsity team. A ninth grader, Rett was one of two student-athletes selected to offer reflections at the end-of-term Upper School sports assembly, held Nov. 11.

“I have played a couple of different sports over the course of my eleven years here at Country School, including basketball, lacrosse and squash. Outside of school, I also golf, but there is something about football that’s just so awesome and this past season has been so much fun.”

The team, which was made up of 24 seventh through ninth graders, represented a range of abilities from newcomer to veteran. In his role as captain, and as a “senior” at the Pre-K through Grade 9 independent school, Rett focused his energies on making sure that his teammates all felt valued and encouraged regardless of skill level.

“As a ninth grader, you feel a sense of duty to make the younger players know that they are part of a team. Not just on the field, but also in the hallways of the Upper School building, out at recess and in the dining hall. You have to take them under your wing, show them the ropes, and make them feel welcome. I remember my older teammates who did that for me. Whenever I would see them, they would say ‘hi’ or give me a high-five and it gave me such a good feeling,” recalled Rett who began playing at the varsity level as a seventh grader. “Team-building and confidence-building are as important as skill-building.”

“We want to be competitive, of course, but we also want to be kind and set a good example for all on the field,” said the quarterback and Rowayton resident whose parents are Eric and Country School alumna Stephanie Zeigler ’81. While he has not yet finalized his plans following graduation in the spring, he is determined to continue pursuing basketball and lacrosse – and especially football – at the highest levels possible.

“Rett was a terrific captain for us this season, and he set a great example for the rest of the team by working hard in practice to improve his passing, running and tackling skills,” said Head Coach and Upper School Teacher Scott Lilley. “It’s clear from watching him play that he loves the game of football, loves to be involved in every play. That enthusiasm helped to bring the rest of the team along with him.”

“As this season comes to a close, I will always reflect back on this year with a huge smile—remembering that after every play, my teammates would be there to help me up and lift me to my feet. And it's these things, these small acts, that make a big difference. These small acts of sportsmanship and kindness are what sets my team apart and which will mark my memory of NCCS,” said Rett.

New Canaan Country School is a co-ed, independent day school for students in Pre-K (ages 3 & 4) through Grade 9. Located on a 75-acre campus in New Canaan, the school offers fifth through ninth grade students 13 different athletic offerings and age-appropriate physical education classes and activities for those students age 3 through Grade 4. For more information about the school or its athletic program, please visit countryschool.net.