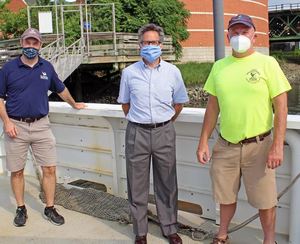 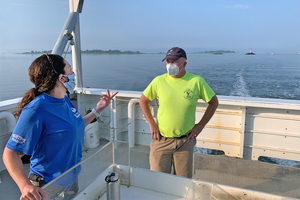 The Maritime Aquarium at Norwalk welcomed State Rep. Joe Gresko (D-Stratford) out on its research vessel early on Wed., July 8 to be part of an ongoing study of Long Island Sound’s water quality.

The outing, with a 6 a.m. departure time, was one of The Maritime Aquarium’s regular biweekly trips to collect data on the conditions in Norwalk’s outer harbor. Staff Scientist Dr. Dave Hudson gathered information on such factors as temperature, salinity, dissolved oxygen, water clarity and more from aboard the Aquarium’s R/V Spirit of the Sound.

Launched in 2015, R/V Spirit of the Sound is a 64-foot catamaran that was the country’s first hybrid-electric research vessel.

Gresko is vice chair of the General Assembly’s Environment Committee, and a member of the Energy & Technology Committee.

Learn more about the Aquarium’s conservation efforts, as well as about exhibits, programs and public and private outings aboard the research vessel this summer, at www.maritimeaquarium.org.