Tapping into Tradition: A Sweet Celebration of the Season 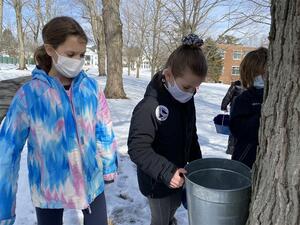 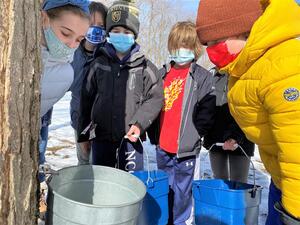 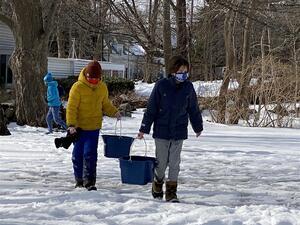 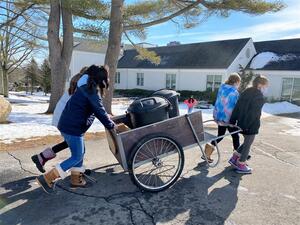 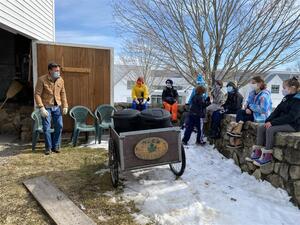 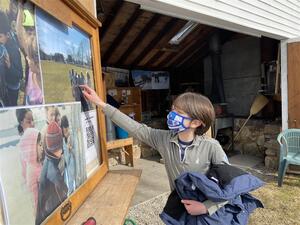 “It’s really surprising how much sap is in these buckets. I totally didn’t expect this.”

Fourth grade student Henry Macon of Norwalk is peering underneath the silver lid of an aluminum bucket. He and his classmates are participating in the long-standing New Canaan Country School tradition of collecting sap from the tapped maple trees which line the school’s front driveway and dot the landscape of its 75-acre campus.

“We’ve had some warmer weather today, so the juices are really flowing,” acknowledges Visual Arts Teacher Chris Lawler with a deep chuckle. Lawler, who is as comfortable outdoors as in, teaches wood-working skills, light soldering and jewelry making at the Pre-k through Grade 9 school. In addition, he has also overseen maple syrup production for 27 seasons. The program itself goes back to at least the 1970s.

“Do these trees ever run out of sap?” asks Maddie Ortiz of Stamford.

“Nah, some winters are colder than others, for sure, but come late-February, the trees all begin to flow. It’s nature’s promise. Did you know that the Indians…” Lawler’s voice trails off as he marches purposefully through the snow, a pied piper of students, headed ever onward to the next tree. The children jostle to keep up as they negotiate two large carts in small teams of five and six. Handmade, oval wooden signs affixed to the front of each cart read “NCCS Maple Syrup” and have the well-worn patina of having weathered many seasons; many students.

The activity, which combines elements of science, history and math, is part of the student’s academic schedule. Grades take turns - there is plenty to do, even for the youngest learners. As did his predecessors, Lawler teaches the children about the early history of the school’s campus as a working farm and explains how the syrup production process hasn’t changed all that much in the last 500 years. They learn about the physiology of trees, how to use the proper equipment and how to calculate density and temperature.

After about forty minutes of collecting sap, the party pushes and pulls their cart-filled bounty to a little building in the middle of campus known to all as the Sugar Shack. The students ease themselves up onto a stone wall in a semicircle around the shack’s open barn-style doors.

When lit, the fire-fueled boiler crackles while Lawler transfers the day’s payload. Everyone on campus is familiar with the sweet smell that comes next, a telltale indication that the boiling process has begun. Little cups are passed around and filled with a watered down version of the sugary liquid. It is customary at this moment for Lawler to recite an ode to the arrival of another glorious spring while the students sip their maple flavored tea. An accomplished banjo player and fiddler, Lawler concludes the day’s class with a country tune or three.

The philosophy of educating children in natural settings - a hallmark of a Country School education, goes back to its founding in 1916 and is still alive and well today.

“Maple sugaring is one of my favorite Country School traditions,” says Caryn Antonini ’87 of New Canaan, whose sons, Cristiano and Nicholas, are now experiencing the program as fifth and second grade students.

“Maple sugaring is as old as time and is such a quintessential New England activity. It has definitely endured here at Country School. I am always so pleased when graduates over the years have reached out to let me know that they are maintaining the tradition and keeping the craft alive,” says Lawler.

New Canaan Country School is a co-ed, independent day school for students in Pre-K (ages 3 & 4) through Grade 9 living in Westchester and Fairfield counties. Graduates excel at top day, boarding and public secondary schools and go on to lead lives of impact and purpose. For more information, please visit countryschool.net.