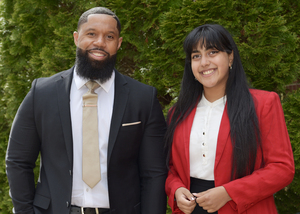 Western Connecticut State University senior Bakhtawar Izzat and recent graduate Isaac Jean-Pierre have been named recipients of this year’s Henry Barnard Distinguished Student Award for outstanding academic achievement and engagement in service and other activities in the university, regional and global communities.

Izzat, a Kathwari Honors student at WCSU, has demonstrated a diversity of interests ranging from academic research and peer mentoring to community service, women’s health, social justice and international diplomacy. Jean-Pierre has taken an uncommon path as a veteran of the Stamford Police force whose injuries on duty led him to return to WCSU after an extended hiatus to complete his bachelor’s program with distinction, with aims of continuing his education to pursue a master’s degree. Their extraordinary accomplishments earned them recognition from the Barnard Award program, established to recognize student excellence at the four universities of the Connecticut State Colleges and Universities system.

Izzat served from 2018 through 2020 as a Certified Career Peer Leader and marketing strategist in the WCSU Career Success Center, reaching more than 200 students through social media, in-person meetings and class presentations. She has earned recognition as a Certified Peer Educator from the national student affairs organization NASPA. Further experience has included positions as a teaching assistant in the Kathwari Honors Program, peer mentor in the WCSU First Year Program, research assistant in the Social Sciences Department, resident assistant for WCSU Housing and Residence Life, and mentor for the Promoting Academically Successful Students program.

Izzat this spring earned the prestigious Dean’s Award of the Macricostas School of Arts and Sciences, recognizing academic excellence and breadth of knowledge exhibited throughout her undergraduate career at WCSU. She represented the university on the global stage in 2019 as a delegate at the United Nations International Diplomacy Forum on Humanitarian Affairs held in Bangkok, Thailand. Other recognitions have included the 2020 Rosa Parks Award for Global Citizenship from the Social Sciences Department, Rotaract Club awards for community service and student organization engagement, and scholarship awards from the Schofield-Blauvelt, Arthur and Alberta Rosien, and WCSU Alumni Association grant programs. She has served as a volunteer for the university’s annual Western Day of Service, Danbury Women’s Center, Dorothy Day Hospitality House, Ann’s Place Festival of Trees, local animal shelter and rescue organizations, and other community service activities.

Izzat expressed a passion for “discovering ways to make the world a better place in any and every way that I possibly can.” She devoted many hours to student mentoring during her undergraduate studies, and said that she will continue to seek opportunities “to help students with all aspects of college, career and life.”

Her academic adviser, Professor Emeritus of Political Science, Conflict Resolution and Peace Studies Dr. R. Averell Manes, observed that Izzat “is a highly intelligent, motivated, dedicated and engaged student” who “possesses a clear sense of personal and professional responsibility beyond most students I have met in 30 years of teaching. She is a natural leader and scholar, and she is an extraordinary person who will excel at any endeavor to which she applies herself.” Izzat has been named as the 2021 recipient of the R. Averell Manes Gender Equity Award, created this year to honor the professor’s career of service in the fields of gender justice and conflict resolution.

Jean-Pierre’s long journey to graduation began with enrollment in the WCSU Ancell School of Business in 2001. Less than a year into his studies, his father suffered the first of several strokes that eventually required Jean-Pierre to leave college and seek full-time employment. He worked for several years as a Stamford Hospital security officer before joining the Stamford Police Department in 2007. During his tenure from 2007 to 2018, he served as a patrol officer, community liaison working with at-risk youth and underserved populations, and leader of a disaster relief mission to Haiti following the 2010 earthquake in that island nation.

A debilitating back injury suffered while apprehending a suspect led Jean-Pierre to return to WCSU in fall 2018, “determined to meet the goal not only to graduate but to do so with honors,” he recalled in his Barnard Award application letter. He achieved his objective emphatically as a Dean’s List designee in 2019 and 2020, member of the Beta Gamma Sigma honor society and National Society of Leadership and Success, and magna cum laude graduate in December. He plans to pursue a master’s degree while seeking corporate employment as an operations manager, as well as volunteering to assist his mother’s nonprofit organization Hands to Haiti.

“I have taken this opportunity to go back to school very seriously and have been dedicated to learning as much as I could, being engaged in my classes with my professors and fellow students in sharing my experiences and learning from theirs,” Jean-Pierre said. “My natural family, church family and friends are elated for me because they know the hard work, sacrifice and dedication I have put into this new chapter on which I am embarking in my life.”

For more information, contact Sherri Hill of the Office of University Relations at This email address is being protected from spambots. You need JavaScript enabled to view it. .