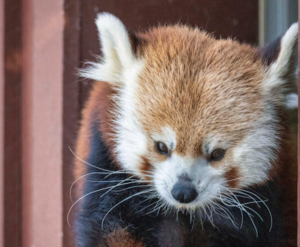 The family at Connecticut’s Beardsley Zoo is saddened to announce the passing of Rochan, a seven-year-old male red panda, on February 17, 2022.
Rochan was being monitored and treated for a health condition affecting his ability to walk. Upon completion of an MRI to investigate Rochan’s increasing difficulty, lesions on his spine were identified, further compromising his mobility. The difficult decision was made to humanely euthanize him based on quality-of-life considerations.

Originally a temporary visitor while his habitat at the Franklin Park Zoo in Boston, Mass., was undergoing renovations, Rochan became a permanent member of the Zoo family in October 2015. Rochan, which means “light,” “brilliant,” “celebrated” and “red lotus” in Hindi, was beloved by staff and guests alike, and immensely popular on the Zoo’s webcam that allowed the public to watch Rochan and his companion, Berry.

“Ro will be deeply missed by all of us here at Connecticut’s Beardsley Zoo,” said Zoo Director Gregg Dancho. “He had a unique personality and related well both to his companion, Berry, and to his animal care staff. It has been our privilege to have known him for six years.”

The Zoo remains home to Berry, a female red panda who has been part of the Zoo family since 2020. The Natt Family Red Panda Habitat opened in October 2018, a gift from Bob and Helen Natt of Easton, also funded by monies raised by supporters and from the Werth Family Foundation. The Red panda habitat offers indoor and outdoor viewing access for the Red pandas with air-conditioned indoor living quarters and a yard landscaped with bamboo and plenty of treetop spots for sunbathing.

Rochan and Berry were part of the Species Survival Program (SSP), a breeding and management program designed to preserve the long-term sustainability of captive-based animal populations. Connecticut’s Beardsley Zoo will work with the Association of Zoos and Aquariums (AZA) Species Survival Plan to identify a new companion for Berry.

Red pandas (Allurus fulgens fulgens) resemble raccoons, are solitary animals, and are nocturnal by nature. Like their larger and better-known black and white cousins, red pandas primarily eat bamboo but will occasionally eat fruits, berries, young leaves, and certain tree bark. Red pandas are not true pandas, rather, they are a unique species whose name “panda” is derived from a Nepalese word ”ponya,” meaning “eater of bamboo.” Like many in the Connecticut’s Beardsley Zoo’s animal collection, the red panda is threatened in the wild by territory loss and fragmentation, resource depletion, and are frequently hunted for their beautiful fur.

Let your curiosity run wild! Connecticut’s only zoo, celebrating its 100thth year, features 350 animals representing primarily North and South American and Northern Asian species. Guests won’t want to miss our Amur tigers and leopards, maned wolves, and Mexican gray wolves and red wolves. Other highlights include our Spider Monkey Habitat, the prairie dog exhibit, and the Pampas Plain with giant anteaters and Chacoan peccaries. Guests can grab a bite from the Peacock Café and eat in the Picnic Grove. Connecticut’s Beardsley Zoo is a non-profit organization celebrating its Centennial year when the mission of helping fragile wildlife populations and eco-systems is more important than ever.

Tickets must be purchased on the Zoo’s website at beardsleyzoo.org: we recommend that guests continue to wear masks while visiting the Zoo, but when guests are outside and are able to maintain social distance, masks may be removed. In any indoor area, or when social distancing cannot be maintained, masks must be worn. Everyone over the age of two, except for those with medical conditions that preclude wearing them, should have a mask available.