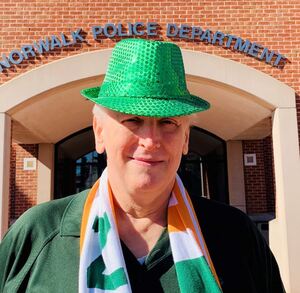 2022 Norwalk St. Patrick’s Day Parade, rescheduled to this Saturday, March 19, will step off at 11am at Veteran's Park and proceed up Washington Street to North Main and end at Pine Street.

A ceremony will immediately follow under the tent at O’Neill’s Pub at 93 North Main Street.

Bill began his police career in 1981 with the Greenwich Police Department before becoming a Norwalk Police Officer July 21, 1983. Over his forty-years of service, Bill attained the rank of Detective and has proudly served as an investigator for thirty-three years. Bill is a certified Fraud Examiner and Fraud Investigator and received recognition and awards for his excellent work.
“I am honored to be Grand Marshal and excited to celebrate the rich history of the Irish people at the Norwalk Saint Patrick’s Day Parade,” stated Maloney. “I wish to thank the Norwalk Police Emerald Society for my selection.” Maloney’s family hails from Ireland. On his father’s side, the Maloney’s and Kelly’s from Cork and on his mother’s side the Connolly’s and the Moran’s from Killeshin and Galway. Maloney is married to his wife, Yajun Shan Maloney and has three children, Michael, Meghan and Kelly.
The Norwalk Police Emerald Society is a 501c3 charitable organization.
Visit Norwalk Police Emerald Society on Facebook here for parade updates.