Danny Lyons Celebrates 35 Years On The Air at WEBE 108 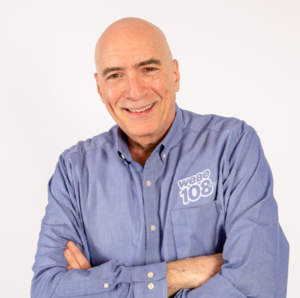 On March 23 in 1987, Danny Lyons arrived at Connoisseur Media’s WEBE 108 plugged in his signature lime green Koss Pro4AA headphones and pushed play on Chicago’s hit “Will You Still Love Me”. 35 years later, generations of WEBE listeners continue to tune in to Danny on-air, online and through their smart speakers.

Danny has been one of the most successful midday radio hosts in the country. Over the years, Danny has achieved double digit ratings, often reaching more than 30% of radio listening females in Fairfield County. In the latest ratings period, Fall 2021, Danny was once again #1.

In addition to hosting his show on the air each day, Danny created “The WEBE 108 Kidsfest” a signature station event for kids and families that ran nearly 30 years. “The WEBE 108 Christmas Wish” which has given out tens of thousands of dollars to those in dire need every holiday season. He has also been a tireless supporter of many charities and community organizations, most notably The Ronald McDonald House.

Danny grew up in Waterbury, CT and began his radio career 50 years ago, in 1972, at WLIZ in West Palm Beach, FL. He returned to his hometown and spent the next few years at WWCO before moving to New Haven’s legendary top 40 13 WAVZ where he first began hosting the midday slot in the market in 1978. After a few years, he worked at WKCI (KC-101), WTIC (96 TIC-FM) in Hartford and 66 WNBC in New York. He finally arrived and stayed at WEBE 35 years ago this week.

On his 35 years in the biz at one station in one market in the same daypart Danny remarked, “The time has literally flown by and I still enjoy being part of the lives of so many great listeners in Southern CT.”

Keith Dakin VP of Programming added “Danny really is WEBE. When the listeners think of the radio station, Danny is the first person to come to mind. He truly is a master of his craft and it is an honor to work with him every day”.