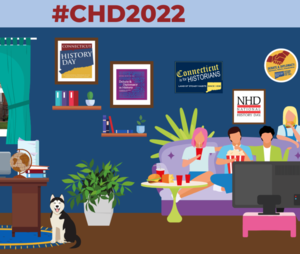 The students’ project, “The Cuban Missile Crisis: The Diplomatic Dilemma” was inspired by the 2022 theme, Debate and Diplomacy in History: Successes, Failures and Consequences, and was based on their original research.

The group chose to analyze the dramatic standoff between the US and the Soviet Union as an academic exercise, before the current war in Ukraine brought the topic back to the forefront of the news.

The students report that the Cuban Missle Crisis “was a prime example of a stand-off that if not handled correctly, would have led to the deaths of millions. Looking back, events like these can better educate future leaders on how to handle situations that require cooperation and communication, so that when the time comes, they will be better prepared to engage in meaningful debate and diplomacy.”

Twelve Connecticut students received 2022 National History Day® awards at a virtual award ceremony on June 18.  In total, sixty-one students qualified to represent Connecticut at the national contest this year by placing first or second at the Connecticut State Contest last month. These students joined close to 3,000 others from the U.S. and overseas to compete at the national level.  Eleven of the Connecticut award-winners finished in the top ten in their category, and eight received special awards in addition to their top-ten medals.

Connecticut History Day (CHD) is one of 58 affiliate programs of National History Day, and is a program in residence at Connecticut’s Old State House. CHD annually engages over 4,000 middle- and high-school students in historical research, interpretation, and creative expression through project-based learning. Led by the Connecticut Democracy Center,  CHD is presented with major funding and partnership support from CT Humanities. Program support is provided by the Upper Housatonic Valley National Heritage Area and New Haven Museum. For more information, visit historydayct.org