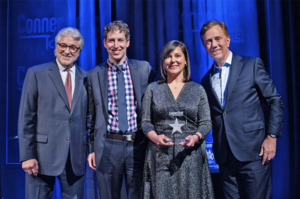 The award recognizes Tison’s efforts on behalf of Connecticut tourism above and beyond her role as Aquarium marketing director. To the betterment of Connecticut’s tourism industry and the state’s economy, she served on then Gov.-Elect Lamont’s Arts, Culture and Tourism Transition Policy Committee, and currently is a member of the Speaker of the House of Representatives' Blue Ribbon Panel on Tourism and also the Connecticut Tourism Coalition.

In addition, Tison is on the marketing committees of the Greater Norwalk Chamber of Commerce and the Association of Zoos & Aquariums (AZA), the national accrediting organization that sets the highest standards for animal care and guest safety.

“Volunteering takes time, but it’s time I’m enthusiastically willing to give because it benefits all of us,” Tison said. “It doesn’t just benefit me or The Maritime Aquarium. It benefits the city of Norwalk, and the entire state. I’m just so thankful to be able to merge my personal passion and my professional experience to highlight everything that Connecticut has to offer.”

As The Maritime Aquarium’s marketing director, Tison directs the marketing and communication efforts of Connecticut’s second-largest family attraction; an aquarium rated by TripAdvisor reviewers as one of the Top 20 aquariums in the U.S. and No. 1 in New England.

A resident of Fairfield, she joined the Aquarium in October 2016, coming from Media Storm, where she served as a managing director for 10 years. Previously, Tison held VP titles at both Grey Worldwide and Young & Rubicam in New York.

Learn more about The Maritime Aquarium at www.maritimeaquarium.org.

An accredited member of the Association of Zoos & Aquariums, The Maritime Aquarium at Norwalk is a 501(c)(3) not-for-profit institution whose mission is to inspire people of all ages to appreciate and protect the Long Island Sound ecosystem and the global environment through living exhibits, marine science and environmental education.

The Maritime Aquarium receives support from the State of Connecticut DECD’s Offices of Culture and Tourism.