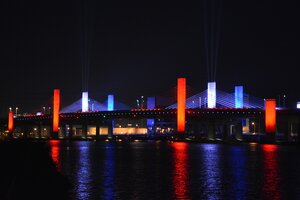 Governor Ned Lamont today announced that he is directing U.S. and State of Connecticut flags to be lowered to half-staff from sunrise to sunset on Wednesday, December 7, 2022, in recognition of National Pearl Harbor Remembrance Day.

The observance honors the lives lost in the attack on Pearl Harbor in 1941. Accordingly, since no flag should fly higher than the U.S. flag, all other flags – including state, municipal, corporate, or otherwise – should also be lowered during this same duration of time.

In addition, Governor Lamont announced that the Pearl Harbor Memorial Bridge in New Haven – informally known by many as the Q Bridge – will be illuminated in red, white, and blue lights on the evenings of Tuesday, December 6, and Wednesday, December 7. Beacons will project light upward from the bridge towers from sunset through the early morning hours. The bridge is named in honor of those who served during the attack.