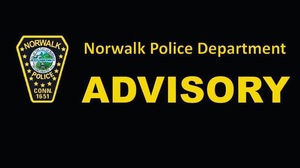 On October 10, 2020, both officers were working in the Patrol Division. At about 12:47am, Norwalk Police Dispatch could not raise Officer Laudano on the police radio nor could they reach her on her cell phone. The Automatic Vehicle Locating system, (AVL) was checked and her vehicle was located on the map in the area of 426 Main Avenue.

An officer was dispatched there and located her vehicle in the parking lot of the Even Hotel. Supervisors responded to the location and observed her marked patrol vehicle parked in the lot along with the marked patrol vehicle of Officer Dimeglio. Supervisors made contact with hotel management and learned that the officers were in a room at the hotel. The Supervisors proceeded to the room and located both officers. The officers were not in a condition to respond to calls for service.

Deputy Chief Walsh responded and Chief Kulhawik was contacted. The officers were relieved of duty and placed on Administrative Leave.

An initial inquiry into the circumstances of what had occurred was conducted by Deputy Chief Walsh and Deputy Chief Zecca. As a result of the information uncovered regarding the scope of the conduct of the officers in the hours leading up to being located, Chief Kulhawik contacted State’s Attorney Paul Ferencek of the Judicial District of Stamford/Norwalk.

After consulting with State’s Attorney Ferencek, a determination was made that the conduct exhibited was beyond departmental policy violations and a criminal investigation into the incident was warranted. As a result of this comprehensive investigation by Norwalk Police Detective Division Supervisors, arrest warrants were obtained for both officers.

Mayor Rilling was immediately notified of the incident by the Chief from the onset of the investigation and was kept abreast as the investigation proceeded.  Chief Kulhawik stated: “While I am appalled at the behavior and conduct that was exhibited by these officers while in an on-duty capacity, I am proud of the professional manner in which the patrol supervisors of this department initiated this complaint and the subsequent criminal investigation conducted by the Detective Division supervisors. We have a high expectation of our officers. We demand this, as does our community who place a great deal of trust in them.

Intentional conduct that violates that trust and goes against the mission and values of this department will not be tolerated. Now that the Criminal Investigation has been completed, an Internal Investigation will follow and the Disciplinary Process will commence.

I am extremely disappointed in the apparent dereliction of their duty to both the citizens of Norwalk as well as to their fellow officers. We will have no further comment until after the disciplinary process is complete”.

Anonymous Internet tips can be sent to Norwalk Police website at: www.norwalkpd.com

Anonymous text tips can be submitted by typing "NPD" into the text field, followed by the message, and sending it to CRIMES (274637)