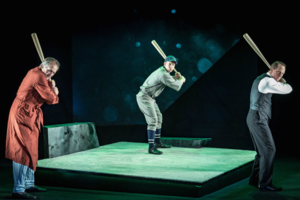 Celebrating forty years of mounting successful operation in the inimitable barn theater on Crickettown Road, executive director Andrew Horn and artistic director Joe Brancato have reprised a particular Penguin success, Cobb, as part of their memorial season. It’s a salutary choice.  Back in 1995 when Penguin first produced it, the show went on to be picked up by Kevin Spacey for an added run in Greenwch Village’s larger Lucille Lortel Theater.

The current production is probably better than the original, not only because of designer Christopher Thompson’s stark, evocative setting and fine projections, not only for Christopher Metzger’s meticulous costuming and Christine Watanabe’s sensitive lighting but also because the play’s four stars, Stephen Bradbury as the oldest Ty Cobb, Todd Lawson as Ty Cobb in his prime and Andy Striph as the youngest manifestation of Ty Cobb, “Peach”, all confronting Damian Thompson as Oscar Charles, the “Black Cobb”, as they competed for supremacy, were perfectly, clearly heard.

Which is what makes it all so good.  Director Joe Brancato’s devotion to his audience, something the brace of new, darling directors in New York stages would do well to emulate,  has persuaded his wonderful cast to outdo themselves in delivering every word of playwright Lee Blessing’s small gem of a play to his welcoming, attentive audience.  It’s an experienced skill. It’s also an art. And most of all, a necessity, convincing his actors to project as a vital part of their interpretations. Of course, playwright Blessing’s play is a natural for such a coming together of acting skills, by reason of his subject’s character.

Ty Cobb was known as the most hated man in baseball, the nation’s favorite sport. No matter that he was a superb ball player, no matter that he was the signature entry into Baseball’s Hall of Fame, no matter that he amassed millions back in the day when a major baseball player’s yearly salary was less than today’s player’s weekly stipend. He was a mean, tough, angry son of a bitch the entire length of his baseball career. And here, in Blessing’s conceptual imaginings, old Ty Cobb, (Stephen Bradbury), mid-life Ty Cobb (Todd Lawson) and young Ty Cobb (Andy Striph), all in the great Hereafter, are every one of them still angry.

Director Brancato has seized on this: manifesting anger makes for raised voices, naturally raised voices.  Which makes for easy audibility as well as audience energy and pleased attention.   Many theatergoers have come to depend on technological assistances in order to hear and enjoy their shows, an electronic layer that often flattens out otherwise good performances.  Not here, in the Penguin barn.  Wise, wily Brancato has woven his actors’ acting motivations into a wealth of audible legitimacy and no unnecessary shouting when the shouting is inspired by the characters and the play.

Conflicts between and among the aspects of Cobb arise with regularity, conflict being a natural state of Cobb.  And here in this Hereafter, Cobb long dead, angry at being forgotten, angry at being thought of as lesser than that smarmy Babe Ruth, angry at having a black baseball player – in the minors! – Oscar Charleston being compared to him as the “Black Ty Cobb”, the ”Black Ty Cobb”? When everybody knows that there’s no better ball player than the real Ty Cobb, the White Ty Cobb.  Or they damn well ought to. They certainly don’t know who in hell that blackball player is.  But Oscar Charleston sure knows.  And even though no black baseball player is allowed in the majors, Charleston knows right here in the Hereafter that he was a better baseball player than that Ty Cobb ever was.  And he lets Cobb know it, all generations of him. It comes almost to fisticuffs but fisticuffs among the dead?  Too ridiculous.   Even for all ages of Cobb.

Blessing’s play, compact as it is, still runs into middle period doldrums when the antagonisms over their personal history, the details of the murder of Cobb’s father by his mother are hashed out repeatedly between the older and younger aspects of Cobb. Blessing leaves it charitably somewhat resolved in favor of his mother, still a conflict for eternity. How Cobb amassed his millions  dapper middle aged Cobb arrogantly attributes to his superior shrewdness, such as buying a big block of cheap Coco Cola stock. As for what people call his racial bigotry, you’re just  too stupid to understand that it’s as natural as breathing in Georgia during all of Cobb’s lifetime.

Baseball fans, hard core fans, still argue: was Cobb the greatest? How do you separate the baseball player from the man and his history? Or do you? I wonder if he’d be pleased to know he still makes a good show.