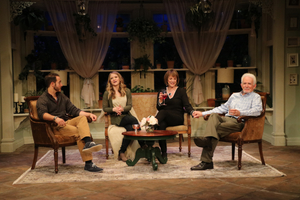 Mr. Kline, who has previously been seen on the Penguin stage in Ten Percent of Molly Snyder, Greetings!, Class and Don’t Talk to the Actors, is well known for his role of Larry Dallas on the long-running sitcom Three's Company. He also starred as the Wizard in the first national tour of Wicked and recently played Kid Twist in the Paper Mill Playhouse world premiere production of The Sting. Ms. Robbins’ Broadway acting credits include: Good News, I Love My Wife, Crimes of the Heart, Gypsy and The Tale of the Allergist’s Wife.

Mr. Caruso directed the critically acclaimed musical Southern Comfort at The Public Theatre, was associate director of the Broadway shows Groundhog Day, Matilda, Ghost, Mamma Mia!, Bombay Dreams, Follies, Master Class, and also directed the national tour of Matilda. For Penguin he staged Syncopation, 10% of Molly Snyder, Over the Tavern, Around the World in 80 Days, Greetings, Shipwrecked, and Don’t Talk to the Actors.

Says Mr. Brancato about Clever Little Lies, “a mother always knows when something is wrong, but when Alice tries to get to the bottom of things between her son and his wife, secrets are spilled and she and her husband Bill find out that honesty may not be the best policy after all.”