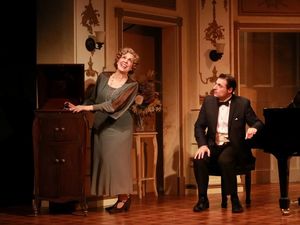 That’s tired Cosme McMoon in a mash up of formal wear, sitting at a grand piano in a grand period room in a grand hotel, feeling sorry for himself, playing a little jazz, drinking a little drink, reminiscing about the grandest gig of his life, one he dearly wished he’d never won, but on the other hand,it was unforgettable. It’s 1964, twenty years since Florence Foster Jenkins died, one month after her grandest triumph: singing at Carnegie Hall. There was only one problem: she couldn’t sing. And she didn’t know it, not until that night. And who accompanied her there? The same accompanist who had been at her side for the previous twelve years, most of them in agony, because he really was a musician, starving until he latched on to Florence Foster Jenkins. Or rather, until she latched on to him, Cosme.

Cosme McMoon. Remembering. Answering that ad. Going up to that swank hotel. Desperate. 1932 wasn’t a year for finding jobs of any kind, let alone playing the piano. And all of a sudden, there she was, a smiling society lady in her sixties, Mrs. Bayfield, although she still called herself Florence Foster Jenkins, being as gracious as she could be to him, to him, Cosme.

Playwright Stephen Temperley’s genteel, even kindly reminiscence of a play about one of the most idiosyncratic characters ever to hit the public eye comes at us through the lacerating lens of her accompanist, her employee who took the job before he ever heard her sing because he needed to pay the rent, because he needed to eat, because his dreams of being a famous pianist and composer were dreams he couldn’t afford. And he stayed, after he heard her sing for all the same reasons. It was 1932, a job was a job. All he had to do was grit his teeth . She was that bad. He never told her. He didn’t dare. She was demanding, she was besotted with singing, but she was kindly and she paid the bills.

Lady Florence, as she liked to be called, energetically built music societies and clubs which she controlled completely. They were her audiences. Only members were allowed to attend her recitals and she and Cosme rehearsed assiduously for each performance, Cosme measuring every one of his words as he tried to keep her in the correct tempo, on the correct pitch. It was useless. “What matters most is the music you hear in your head,” she said. They traveled extensively so that Florence, Lady Florence, could dispense her musical largesse to appreciative audiences she had selected. And somehow, as Cosme constantly feared, the word got out. This kindly, wealthy society lady had a bee in her bonnet. Florence Foster Jenkins was a hoot. And she didn’t know it.

Cosme’s reminiscences turn darker when he recounts her embarking on recordings. He’s terrified she’ll hear at last what she really sounds like and then where would he be. Totally foundless fears. Her bounty is as boundless as the sea, her tin ear likewise. What is most challenging is continuing, even with all her money, even with all her music societies. Somehow she never hears the genteel laughter, ever growing into guffaws, somehow she accepts that Tallulah Bankhead, Cole Porter,, Lily Pons and other glitterati have become fans, never questioning why. Of course, it fuels her ambition. And Cosme takes another drink as he faces the impossible dream: even though this time she will not be in control of the tickets, Florence Foster Jenkins is going to sing in Carnegie Hall. Which means he’ll play Carnegie Hall. At last. Even though he’ll be dying inside.

Director Stephen Nachamie, faithfully following playwright Temperley’s much worked, popular script gains points from the bright, handsome setting designed by David Goldstein and from the costume surprises supplied by designer Heather Carey. He has encouraged his actors to play large, to be generous with their performances, which, under other circumstances could invite disaster but when your leading character IS a disaster it’s seamlessly appropriate. Congratulations to Deborah Jean Templin and Jonas Cohen for not only surviving but thriving.

The Penguin Barn continues to charm in its 41st season with this charming SOUVENIR.