Quietly at the Irish Rep Theater 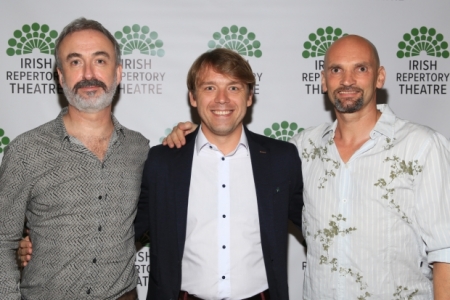 The Irish have kept records, daily records, of their day to day struggles killing each other.  If you want to look up who was killed on what day by what means you can do it. Pick a date significant to you and plunge right into the Web.  Take the Catholic versus Protestant battles in Northern Ireland, for instance.  Every day from 1968 to 2003 is recorded.  You wouldn’t find the names, no, they’re not important.  Just the number.  And the means.  Usually bombs. Thrown at each other. It’s all numb now, even as recent as that.  But not for everyone. Not for survivors.  The hatred lives on.  And the pain.

We’re in a pub, of course. Alyson Cummins’s artful, working setting is that of a typical pub.  Kind of newish looking.  As if it had been rebuilt after a bombing.  Everything’s the same.  Except for the new TV screen.  It’s been forty years.  Oh, the barkeep, he’s new, he’s Robert, which is as close as the Irish can get to his proper name; he’s a Pole.  Ireland’s full of them, looking for a better life and young Robert (excellent Robert Zawadzki) keps things spanking neat and clean, plays his lottery chances on the little standup machine, calls his girl on his cell phone and watches football on the big, new high up telly, occasionally giving profound advice to the players. Life is fine.  A little quiet – no one’s here – but fine.

Until Jimmy (electric Patrick O’Kane) comes in.  And the atmosphere comes immediately charged.  Jimmy, late fifties, hard scrabbled clothes, in a storm of turmoil. He is here, this night, this anniversary night, to meet the kid who threw the bomb into this pub forty years ago and killed a lot of Catholics, among them Jimmy’s father. Jimmy was sixteen when his father died. And now, forty years later, this Ian, this Protestant, wants to meet and to talk.  To talk?  About what?  Love?  Forgiveness?  Tolerance? Here?  In this pub?

Robert keeps his eyes glued to the TV.  Poland is playing Germany?  Whatever.  It’s important.  To keep your eyes on the game.  To keep quiet.

But then,  a man comes into the pub as if it took all his courage just to get through the door.  Obviously, this is Ian forty years later, the kid who threw the bomb that killed Jimmy’s father.  Jimmy cannot contain himself.  In his rage, he pounds Ian to the floor.

Robert stays frozen, out of it.  Ian pulls himself together. Nobody moves.  Nobody speaks. Ian pulls some money from his pocket and Jimmy gets ready to pounce.  Ian puts the money on the bar. Orders two beers.  They’re for himself, two beers are his time here, then he’s gone.  Robert draws the beers, takes his money, gives him the change. Ian moves to the other side of the room,, turns to Jimmy, tries to begin.

Playwright Owen McCafferty, Belfast born, has burrowed into the throbbing bog of living with Belfast’s religious torn past as it daily haunts the existence of survivors of that past, survivors of that long war upon themselves still unresolved.   How many generations will it take before that hate is not handed down and handed down with their daily bread?  McCafferty has boiled the wide flung conflict down to these two, Catholic Jimmy, Protestant Ian, bound together by a single, personal crime of violence.  In Ireland, this is dangerous. Here, it’s a little lost among the muck of battles Americans have to choose from among themselves, which is why this splendid Abbey Theatre production is wisely being presented among resident Irish Americans who relish their Irishness no matter what. Here, they recognize every jot ant tittle of the  practical pub, from its flowing taps down to the coat hook for Jimmy’s mac, nodding their heads at that little ledge where Ian has put his glass, the one running around the column.  Here, the ears are attuned to Belfast cadences as well as every shade of brogue revealing every heritage in Eire.  You can’t fool this audience.  This is bitter medicine and it’s never the time.

The cast is practically perfection.  Patrick O’Kane as Jimmy deserves all the accolades he’s garnered in the travals of the play on its way here.  I have never seen him better.  Declan Conlon’s genuineness is the rock all three actors build on.  Without his honesty there’s only chaos.  Roberd Zawadzki is exactly  the right weight as the bartender whose fight it isn’t but who recognizes instantly where it comes from and gets out of the way as much as he can.  Director Jimmy Fay has handled his company so expertly it’s as if it all had to happen before us the way it does, a superb job. He gets admirable support from Sinead McKenna for lighting, Philip Stewart for sound,  Donal O’Farrell for the fighting, Catherine Fay for costumes.  How fine that the Public Theater has shared in presenting this remarkable production.

The Abbey, the national theater of Ireland, is presenting one of its outstanding productions in the handsomely refurbished Irish Rep.