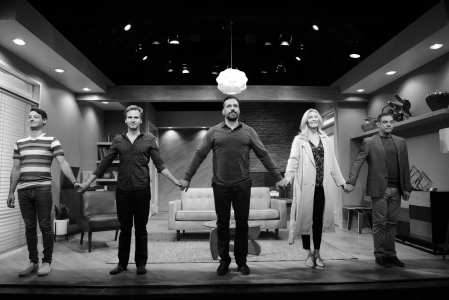 Don’t let the title fool you.  It did me. Of course, it’s meant to be provocative and in that regard succeeds. You expect to see a play about gay marriage, one of those light, frothy comedies, gay quips and banter to equip you for the new realities,  and that alone can determine whether or not you’re going to  be of a receptive mind set, but you’re here, willingly, ready or not, probably in “Show me” mode, chip on the theatrical shoulder.  You are in for a surprise.

Playwright Michael McKeever goes about his set up cunningly, the sleight of hand deftness of a magician or a con man, playing you to think you know what’s coming, what you’re in for, which makes you so busy taking apart Daniel’s and Mitchell’s home that designer Brian Prather has crafted to the nines , all French art de vivre, even to the two faced fireplace upstage that you’re not thinking ahead because you know it already, right? Instead, you’re asking’what’s that couch facing front for instead of like a normal couch facing at least one face of  the super fireplace, ha?  Because it’s a show? And every couch in a show faces the audience?  Oh, all right, give them a break.

Daniel (really fine Ryan Spahn)  and Mitchell (just as fine Michael Montelongo), having dinner at their house for guests Barry ( excellent Lou Liberatore) Mitchell’s literary agent, and Barry’s current boy toy, Trip (just as excellent Leland Wheeler) are doing after dinner drinks and playing  the latest old fashioned word games clever people play.  And you still think you know just what’s going on and what comes next, And you are so wrong.

Of course, the conversation moseys on to marriage, that title, you know.  And Mitchell and Daniel aren’t married.  And it’s been six years, guys. Six years. And are you the perfect couple or are you the perfect couple? Mitch smilingly diverts to Barry, why is he with perfectly nice Trip who is half his age? Maybe more? And who was the last one Barry came to dinner with, so maybe Trip is special but so young? Which Trip takes without  any rancor and maybe a blush but Barry is an agent, and tenacious and back to Mitchell: why aren’t they married? Maybe it’s the wine talking but out it comes: Mitchell does not believe in marriage. For anyone. And then he riffs entertainingly on why he’s absolutely right.  Which does not sit at all well with Daniel. Daniel believes in marriage, wants marriage, but they have company and let’s not get into that.

By now, you are sure you’ve got this all pegged and you are starting to relax. So that some time later, when stunning Lydia comes breezing in, (stunning Anna Holbrook), Daniel’s high fashion mother, all light and charm, to see her boys, what’s going on, what have they been doing, what’s new, this time the chatter does not sit well.  They are not boys, adjuncts to Lydia’s entertainment, they are men, grown men, with concerns. And the marriage gorilla emerges when Lydia leaves, her amusement factor unsatisfied. Mitch holds forth with his same position but Daniel explodes.  He wants to be married!  Because!.  Because now, they can!  And – something snaps. Daniel collapses to the floor.

Now, you’re sitting up.  This is not supposed to happen.  The stage darkens.  Then, in a stark spotlight, Daniel explains.  Directly to us.  Something did, indeed, snap.  The medical explanation is very graphic, detailed, spellbinding.  Daniel has had a rare event in so young a man, the equivalent of a massive stroke.  He is aware of everything but cannot move, cannot speak, cannot even close his eyelids for which he is grateful because if he did, he would die. As it is, he cannot communicate in any way. Death?  In four months.

Six month later, Mitch hurries in.  Trip, of all people, has been watching still surviving Daniel while Mitch has been out.  He really is a nice, level headed kid, who cares about what happened to Daniel and offered his help.  He and Barry broke up badly months ago.  Mitchell goes to see Daniel, comes back pours himself a glass of wine, offers Trip one before he leaves, end of day unwind.  And Lydia comes in. Trip leaves. Lydia sees his wine glass. She proposes that she take over the care of Daniel.  She’s got this big house, all the time in the world.  And money. Mitch won’t hear of it.  And—she’s his mother.  Mitch bellows, “I’m his husband!” But, of course, he’s not.  She goes, with a last look at Trip’s wine glass.  Mitch gets the message. He needs to call his lawyer. The pin drop silence in a rapt audience continues.

Director Joe Brancato has paced his expert company artfully, confidently, sensitively.  The easy comfort of the opening scene is long gone.  Tension rides in everyone, and especially  in you, that smart one, in the audience. Playwright McKeever has had the audacity to begin his tragedy as a comedy and landed a poignant success, bringing everyone, in his audience, canes, walkers, wheelchairs and all, to their feet.

See the Penguin Rep’s surprise hit before it moves to New York City.  You’ll be glad you did.