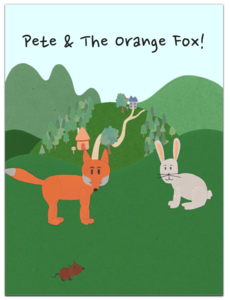 Nyack animation shop CGMuse's newest animated app for kids, Pete and the Orange Fox, will demo this Thursday evening at Microsoft, 11 Times Square, New York, NY 10019. Between 6 and 9 pm, over 800 players will file through the expo, using their assigned time slots to try out the largest curated collection ever assembled of games made in New York. Over 200 developers will attend, hosting their 100 games in individual booths, eager to meet – and get feedback from – dedicated gamers of all types.

Pete and The Orange Fox is an animated story and reading game for new and emerging readers. Based on a story illustrated and written by creator C.A. MacFinn's sister when she was five, the app was developed in cooperation with educators to develop early reading skills. The first in a series of stories following the adventures of bunny Pete, his pig friend Pinky and the dastardly Orange Fox, the app guides young readers to make correct spelling choices in order to move forward in the game. Observation skills, inferencing and curiosity are also rewarded by hidden surprises in the story's illustrations, and young players can use their creativity interacting with features on various pages.

“We really value all the great feedback we've gotten from kids who've played with the pre-release versions of our app, both when we were selected for NYC Arcade, and more recently at Popcon Nyack,” said CGMuse principal C.A MacFinn. We're looking forward to watching folks play with Pete and friends on Thursday. The team's eager to hear what they have to say as we're making our final tweaks on the game.”

The first reading adventure in the Pete and The Orange Fox series will be available on iTunes June 1st.

CGMuse is an award-winning computer animation start-up based in the Hudson Valley village of Nyack, NY. Content created by CGMuse has been screened in and selected for film festivals and conferences around the world, including SIGGRAPH's Showcase for Innovative Mobile Apps, NYCArcade and Spring Play: NYC Expo at Microsoft, as well as Athens Animfest in Greece, Canada Shorts Film Festival, Kuala Lumpur Eco Film Festival, Sydney World Film Festival, Australia. Animated apps of CGMuse's making are available through iTunes and selling on every continent (except Antarctica!).

Pete and The Orange Fox (http://cgmuse.com/peteandfox.html), an animated eStorybook for young and emerging readers, and the animated short David and Goliath, will be CGMuse's next 2017 releases. For more information please visit http://cgmuse.com/home.html https://www.facebook.com/CGMuse/ https://twitter.com/cgmuseworks

About Pete and The Orange Fox

CGMuse's Pete and The Orange Fox series are animated eStorybook games for new and emerging readers. Based on a story written and illustrated by creator C.A. MacFinn's five year old sister, the apps are developed by a team of animators, educators and programmers specifically to enhance a variety of important skills in early readers. The first in the series, Pete and The Orange Fox, was selected to demo at NYC Arcade and Spring Play: NYC Expo at Microsoft, #PlaySpring. It will be released on iTunes on June 1, 2017. For more information please visit http://cgmuse.com/peteandfox.html .

This email address is being protected from spambots. You need JavaScript enabled to view it.