Trayf at Penguin Rep Theatre Opens this Friday, May 19 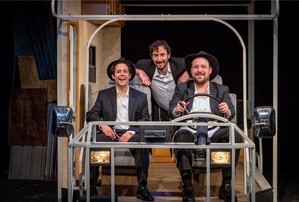 Directed by Benjamin Kamine, Trayf tells the story of Zalmy, a member of Chabad, an Orthodox Jewish movement, who lives a double life: By day, he drives a "Mitzvah Tank" with his best friend Shmuel; by night, he leaves his orthodox community to roller skate and listen to rock and roll music. (“Trayf," pronounced trāf, is the Yiddish word for "non-kosher," or forbidden).

“Overflowing with humor and heart,” says Mr. Brancato, “Trayf asks how hard you have to believe to belong.”

The limited engagement of Trayf runs from Friday, May 19 through Sunday, June 11 at Penguin Rep Theatre in historic Stony Point (Rockland County), New York.Official opening is Sunday, May 21 at 2:00 p.m.

Penguin’s intimate, 108-seat theatre, which is located at 7 Crickettown Road, is converted from an 1880’s hay barn, and offers air-conditioning, wheelchair accessible entrance, rest rooms and seating, and plenty of free parking.

Tickets to Trayf are priced at $44 (including facility fee and service charge). Discounts are available for groups of 10 or more and young people (30 and under).

On Sunday, May 21, the audience is invited to join the cast and crew for cake and coffee after the performance.

On Friday, May 26, there will be a discussion among the actors and audience following the show.

Before the 4:00 p.m. show on Saturday, May 27, there will be a complimentary tasting catered by Lynch’s Restaurant in Stony Point.

Season subscriptions are on sale now and start as low as $116 for the four plays.

To order tickets or for further information, visit Penguin Rep’s website at www.penguinrep.org or call 845-786-2873.

BENJAMIN KAMINE (Director)’s recent credits include world premieres of Carlyle by Thomas Bradshaw (Goodman Theatre), Nibbler by Ken Urban (The Amoralists at Rattlestick Playwrights Theater), A Comedy of Manors by Zoe Samuel (Adirondack Theatre Festival), a cautionary tail by christopher oscar pena (Flea Theater), and the New York premiere of Washer/Dryer by Nandita Shenoy (Ma-Yi Theatre Company). He is an Associate Artist at The Flea Theater and the Resident Director at the Jewish Plays Project.

Joe Brancato was a high school English and drama teacher in 1977 when he peered into an abandoned 1880’s hay barn in Stony Point, New York, and visualized his future: a theatre of his own.

40 years later, Penguin Rep – the theatre Brancato started with Francine Newman-McCarthy and runs with executive director Andrew M. Horn -- has grown from a summer theatre to become one of the Hudson Valley’s most influential nonprofit cultural institutions, reaching tens of thousands of theatergoers each year at its home, in New York City and beyond – with its work moving to Off Broadway and to stages across the country and around the world.

And come this May when the Bronx-born Brancato begins his fifth decade at Penguin, a not-for-profit professional Equity theatre, he is widely believed to be the longest-serving founding artistic director in the U.S. today!

As The Journal News wrote in 1982: “Somebody forgot to tell artistic director Joe Brancato that he’s crazy to use a little barn plunked down in the Rockland County suburbs to experiment with unusual and challenging plays… I hope everybody keeps forgetting to tell him. The region is more the richer for it.”

“Guided by the skilled hand of Penguin’s artistic director, Joe Brancato, the splendid performers get first-rate support, as always at Penguin, by an excellent design team” (The New York Times).

“Penguin Rep is a place where theatergoers can experience magic time after time” (Lohud.com).

As it launches its fortieth season, Penguin Rep Theatre, dubbed “the gutsiest little theatre” by The New York Times, continues to present a cultural experience that is unique in the region: professional productions of new plays at affordable prices.