CAROUSEL at the Imperial Theatre 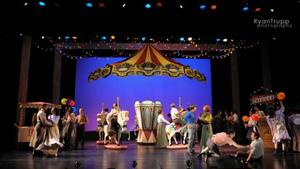 The. Show. Must. Go. On. Especially the triumphant, most glorious revival ever of this American classic of the musical stage in spite of two medical emergencies in the audience that forced the great curtain to come down, the house lights to come up and the performance to stop twice, something hitherto unrecorded in the annals of Broadway, something all forty producing entities and executive producers could not have anticipated. But this extraordinary cast renewed and recaptured their shaken audience into spellbound rapport, as fine a tribute as imaginable to a superb, dedicated company’s layer upon layer of artistic strength throughout the production. Triumphant, indeed.

Carousel, known for its heart, has long been held the jewel in the crown of Rodgers and Hammerstein musicals and none of them has been guarded more fiercely by the powerful Rodgers and Hammerstein musical trust as to every breath, every twitch, so that when the creators of this majestic new revival, director Jack O’Brien and choreographer Justin Peck proposed a radical change in the presentation of the show – they certainly weren’t going to be touching the untouchable music and lyrics and book –consent had to be sought from the top. And wisely, ever so wisely, that consent was given: adopt today’s improved casting tolerances, allow Billy Bigelow, the center of the show, to be played by a black man even though the show has been set in whitest nineteenth century Maine, as transported there by Rodgers and Hammerstein when they scooped up Ferenc Molnar’s tragic love story, Liliom for their musical’s story. Of course it woud all make sense if he were handsome, sexy, a superb singing artist and a fine actor. Joshua Henry is the brilliant choice.

Billy Bigelow (Joshua Henry) the barker for Mrs. Mullin’s carousel in an amusement park on the Mine coast, is also the lure for all those giddy girl customers which drives Mrs. Mullin wild with jealousy because Billy also keeps her bed warm, but business is business. Two of those girls, Julie Jordan (Jessie Mueller) and Carrie Pipperidge (Lindsay Mendez) linger, smitten. Billy shines up to Julie and she is lost, but Carrie has plans, sensible plans to marry Mr. Snow. She departs. Julie stays in the gathering dusk, and she and Billy share, achingly, touchingly, one of the most famous songs in the American canon: “If I Loved You”.

In a jealous rage, Mrs.Mullin (Margret Colin) fires Billy. In a backlash, he marries unquestioning, adoring Julie. And feels trapped. He’s still wild, he still needs to feel free, to run with the pack led by evil Jigger Craigin (Amar

Ramasar ). When Julie tells him she’s going to have a baby, the jolt of joy fades before the beginnings of responsibility. He’s got to provide now for his family. He’ll do anything. And when Jigger talks him into a a robbery , he’s ready. But to kill? He cannot. Everything goes wrong. Rather than be captured, Billy kills himself.

And in the second act, we find out more, much more about the mysterious Starkeeper (John Douglas Thompson), when Billy wakes in limbo, in a strange Heereafter, torn with remorse for his wasted life. He is given one chance to go back, to do something, anything to make amends.

Back in the day when musicals were more about the music than anything else, to have at least hit song out of twenty meant the show could run forever. Of Carousel’s eleven songs, woven compellingly into the fabric of Billy’s and Julie’s surroundings as well as their love story, I count an unbelievable nine as long time, enduring hits and am bowled over by the exciting discovery that this magnificent company shows me two more I hadn’t responded to before. But I do now. That is one of the extraordinary aspects of this amazing production.

I’ve always loved and respected the original Agnes De Mille ballets, in this show as well as many others, (in part, I suppose, because her husband and I were war time comrades), but now I have to confess that Justin Peck’s extraordinary dances with his extraordinary dancers brighten, enlighten, exhilarate whole scenes in the show which once were just respectable. He does so with the wholehearted support of his director, Jack O’Brien whose sheer sagacity in digging deeper enriches all his company, in particular his nine leading players, Joshua Henry, Jessie Mueller, Renee Fleming, Margaret Colin, Lindsay Mendez, Alexander Gemignani, Amar Ramasar, John Douglas Thompson and Brittany Pollack.

Without O’Brien’s insights and inspirations, in spite of the magnificent musical score and its handling, less sensitive responses could have turned Carousel into hokum, Santo Lo Quasto’s inventive settings could have been meh, Ann Roth’s costuming so-so, Brian McDevitt’s lighting desperate. Instead, everyone together has fashioned a precious gem. You will be carouseled away.

DO NOT MISS IT.