40 Years of Professional Theater in Rockland - Join the Celebration! 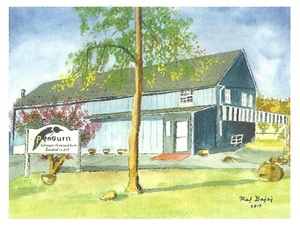 When Penguin Rep Theatre opens its month-long run of COBB, Lee Blessing’s play about the legendary baseball player Ty Cobb, tomorrow (June 30, 2017), it will be exactly 40 years to the day since the enterprising company gave its first performance.

On June 30, 1977, Penguin presented ROAR OF THE GREASEPAINT, SMELL OF THE CROWD, which led The Journal News to extol that “a new theater group in Rockland County started its first season with a bang.”

Months earlier, founding artistic director Joe Brancato was teaching and directing plays at North Rockland High School, when he and Fran Newman (now Fran Newman-McCarthy), slid open the creaky door of an 1880’s hay barn on the property of the Stony Point Conference Center. Where others might have peered into the dark interior and only seen dusty tractors and farm tools, on that day the two visitors had a very different vision: a theatre of their own.

Much has changed during the ensuring decades, reminisce Brancato and Newman-McCarthy. Penguin’s home “was more barn than theatre in its early years,” says Brancato, “and we shared the space with birds, bats and skunks.” He adds, “audiences sat on metal folding chairs without air conditioning.”

“The budget for that first three-play season was $6,000.” says Newman-McCarthy, who pointed out that Penguin’s annual budget now exceeds $400,000.

While Penguin’s origins may have been humble, Brancato and Newman-McCarthy’s vision for the future was decidedly not. They envisioned Penguin as a place to present professional theatrical productions and readings of the highest artistic caliber; to promote new voices and works to enrich the body of American drama; to nurture and develop new talent for the stage; and to reach new audiences for theatre.

In 1982, Andrew M. Horn joined the company and established relationships with Actors’ Equity Association, the union for professional actors and stage managers, Society of Stage Directors & Choreographers (SDC), and United Scenic Artists Local 829, the union for designers and scenic artists.

Five years later, in the fall of 1987, the barn was extensively renovated, modernized and winterized, and Penguin Rep became Rockland County’s first (and only) year-round nonprofit professional theatre.

Since then, under the continued leadership of Brancato and Horn, Penguin Rep Theatre has grown from a summer theatre to become one of the Hudson Valley’s most influential cultural institutions.

Many critically acclaimed projects, which originated at or were developed at Penguin, have had further success, with audiences across the country and around the world experiencing plays first given life in Stony Point. The most recent, TRAYF, which opened the 40th anniversary season in May, is slated to be produced at Theater J in Washington, D.C. in 2018, and last season’s DANIEL’S HUSBAND transferred earlier this year to the Cherry Lane Theatre for a sold-out run.

To mark the occasion, Penguin is throwing a party on Sunday, July 16 starting at 5:30 p.m. The event, entitled “GET SMART and Celebrate,” will be hosted by Barbara Feldon (Agent 99 on TV’s GET SMART), and feature entertainment by Drama Desk nominee Miche Braden and renowned rock and jazz pianist Dave Keyes, and catering by Rockland Roots.

It will start off at Penguin Rep Theatre and then move next door to the Gilmor Sloane Mansion. For further information, visit www.penguinrep.org or call (845) 786-2873.