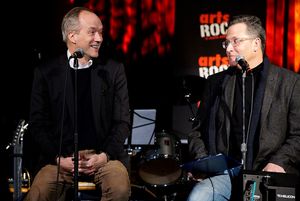 ARTSROCK COMMENCES ITS 2017-2018 SEASON WITH A TRIBUTE TO GREAT WOMEN OF SONG; POLITICS; CHILDREN’S PROGRMAS AND SILENT FILM

Rockland County, NY – August 4 2017: ArtsRock, the acclaimed organization known for bringing affordable professional arts and multi-cultural programs to Rockland County, now in its ninth season, is looking forward to its Fall offerings: Starting with a tribute concert to music’s greatest Divas on October, 7 with Great Women of Song; followed by the third installment of a political panel on October 15, One Year and Counting, A Look at the World One Year After The Presidential Election; the second annual horror film, with music accompaniment, celebrating Halloween will be the Classic 1922 film, Nosferatu on October 27; Families will be thrilled with the return of “Milk & Cookies” and the uniting of two local legends Mario the Magician and The Bossy Frog Band on November 12. Tickets are available at www.artsrock.org

Artistic/Executive Director Elliott Forrest is looking forward to the current season, “As I assembled this season, I brought together some old favorites with a new twist, such as if our audiences liked Tapestry they will love the Great Women of Song.  Last years Frankenstein worked so well around Halloween, I looked for another classic film to marry with live music.  The current political environment could not go unnoticed and will make our discussion quite lively on October 15.”

ArtsRock Executive & Artistic Director Elliott Forrest is looking forward to the current season, “As we assembled this first group of shows, we brought together some old favorites with a new twist. After great music concerts like the CAROL KING’S TAPESTRY and SONGS OF PROTEST, we knew our audience would love GREAT WOMEN OF SONG.  Last year’s FRANKENSTEIN with live music worked so well around Halloween, we looked for another classic film to feature with live music and we picked NOSFERATU.  Our Rockland audience is engaged politically, so we will once again present a lively panel of national commentators on October 15th with ONE YEAR AND COUNTING.”

ArtsRock’s Family Curator, Jeffrey Friedberg, couldn’t choose whether to start the season off with Mario the Maker Magician or The Bossy Frog Band. So he decided to do BOTH, “The first family show of the season on November 19th is a double feature family extravaganza featuring both Rockland County favorites with a Magic and Music Show! The family season will also include ArtsRock’s Annual Puppet Festival and this year will add a low sensory show during the winter to engage children with sensory challenges.”

October 7, 2017 at 8:00pm at The Rittenhausen Theater (Old Nyack High School) , Nyack, NY: Great Women of Song with Alice Leon, Singer/Songwriter; Lorena Mann, Rock Singer (Old No.7 Band); Korliss Uecker (Met Opera Singer); and Shirley Crabbe (Jazz Singer). The evening is a tribute to the great ladies of music from Ella Fitzgerald, Janis Joplin to Adele. The musicians are Scott Strunk, drums, Al Greene, bass/piano and Dan Paladino, guitar. A portion of the proceeds, of this performance, will support the Center for Safety and Change (Rockland’s organization to end gender-based violence and provide shelter and support services for survivors). $28 in advance/$35 at door. www.artsrock.org

October 15, 2017at 2:00pm at The Rittenhausen Theater (Old Nyack High School), Nyack, NY: One Year and Counting, A Look at The World One Year After the Presidential Election. Featuring, among others: GLORIA FELDT, Co-Founder and President, TAKE THE LEAD & former President and CEO of Planned Parenthood Federation of America JOHN HOCKENBERRY, Peabody Award winning broadcaster and anchor of THE TAKE AWAY from WNYC and Public Radio International. Other guests to be announced.  This program is sponsored by Rockland County Tourism.  $25 www.artsrock.org

October 27,2017 at 8:00pm at Nyack High School, Nyack, NY: The Classic 1922 Horror Fantasy Film NOSFERATU, with a theatre organ score performed LIVE by BEN MODEL (Resident Accompanist at MOMA and Library of Congress).  NOSFERATU is considered a horror-fantasy masterpiece. It is a silent film from 1922 and was directed by F.W. Murnau and is an adaptation of the original Dracula story by Bram Stoker.  The iconic title character’s image; makes this one of the most famous films most people have never seen. Ben Model will be an excellent addition to the Nyack experience, one of the nation's leading silent film accompanists, Model is currently a Visiting Professor of Film Studies at Wesleyan University. This event is presented by the non-profits ArtsRock, Rivertown Film Society, and Arts Angels and sponsored by Rockland County Tourism. $20 Adults/Students $10/Rivertown & Arts Angels Members $15 www.artsrock.org

ArtsRock  - The mission of ArtsRock is to provide increased access to professional arts and multi-cultural programs for an underserved, diverse audience, in and around Rockland County. ArtsRock is a 501 (C)(3) New York Not For-Profit Corporation.