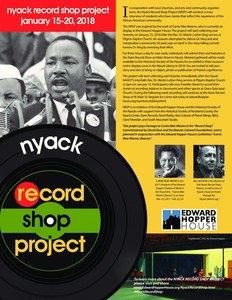 The project opens at 2:00 pm on January 15 with the interfaith Martin Luther King service at Pilgrim Baptist Church, located at 80 North Franklin Street in Nyack. All are welcome at the service, which is led by the local NAACP. Collection of oral histories will begin following the service at 4:00 pm at Grace Episcopal Church, located at 130 First Avenue, across Franklin Street from Pilgrim Baptist.

Oral history interviews will be conducted by volunteers recruited by NRSP Director Bill Batson, and will continue during the week from Tuesday, January 16th to Saturday, January 20th at Kiam Record Shop at 95 Main Street in Nyack. Residents are invited to contribute, and to bring an object, photo or publication of historic interest to augment their stories.

To register for an interview time, interested participants can go to edwardhopperhouse.org/nyackrecordshop.html. Oral histories will be transcribed and archived by the Historical Society of the Nyacks and made available to the public.

The project is inspired by the work of Syracuse-based photographer Carrie Mae Weems. Weems is a MacArthur Genius Award recipient, as well as the first recipient of the Edward Hopper Citation of Merit in the Visual Arts, bestowed by Governor Andrew Cuomo and the New York State Council on the Arts to recognize artists who have made significant contributions to the arts in New York State.  The award is named in honor of Edward Hopper (1882-1967), Nyack native son and artist known worldwide for his iconic
“American realist” paintings and prints. The Hopper Citation legislation was authored by New York State Assembly member Ellen Jaffee.

As part of the Hopper award, Weems has mounted a photography exhibit that runs through February 25th at Nyack’s Edward Hopper House located at 82 North Broadway in Nyack. Gallery hours are Wednesday through Sunday, 12:00 pm to 5:00 pm, or by appointment.

The exhibit, entitled “Beacon,” documents the changing landscape and culture of Beacon, NY, one of many vibrant Hudson Valley communities with rich histories — in many ways a “sister” to Nyack.  As part of her three-year artist residence in Beacon, Weems collected oral histories that play an important role in the Beacon project.

The NRSP oral history collection is led by Historical Society of the Nyack's Trustee Betty Perry under the supervision of New City adult and local history librarian Brian Jennings.

Kiam Records hosts the oral history collection in homage to the record store in Beacon where Weems collected her oral histories. Kiam is the physical presence of Kiam Records, an indie recording label owned by artists Jennifer O'Connor and Amy Bezunartea. "It’s an honor to have our store and our label associated with the effort to record and preserve the full story of the village of Nyack," said Bezunartea, who also serves on the NRSP project's steering committee.

The window installation for Kiam Records will be created by mixed-media artist Kris Burns.

Hopper House Curator Carole Perry and Executive Director Jennifer Patton invited Nyack Sketch Log creator and Historical Society of the Nyacks Trustee Bill Batson to organize the Nyack version of Weem's Beacon project. Batson’s art and essays in the Sketch Log have delighted readers and art enthusiasts for the past six years. He was chair of the effort that erected a monument in Nyack’s Memorial Park as part of the Toni Morrison “Bench by the Road” project to commemorate the life of entrepreneur and abolitionist
Cynthia Hesdra in 2015.

"Every family in our community has a story to tell that could inspire a compelling movie, novel, play and, in some cases, epic poem or opera. When I learned about what Weems had done in Beacon, I realized we have the human resources and organizational infrastructure in Nyack to build on her work — on a large scale," Batson said.

"The Interfaith Martin Luther King service organized by the Nyack NAACP is the perfect launch pad — in the perfect year,” added Batson.  “What better way to honor Dr. King 50 years after his April 4, 1968 assassination than to collect the oral histories of our elders. This collective story-telling summit aims to add to the many public service programs that celebrate King’s legacy by elevating the practice of recording personal histories to the status of an essential and routine civic undertaking — and to share those riches in the broader community."

Hopper House Executive Director Dr. Jennifer Patton was thrilled when she learned that Weems would be the Edward Hopper Citation recipient.  Prior to arriving in Nyack over a year ago, Patton worked on creating oral history projects as the Director of Education at the Hudson River Museum in Yonkers.  "I knew that Weem's Beacon project would find a responsive audience in Nyack, and we’re thrilled that this exhibit is building a stronger bond between the Hopper House and the community.  We hope that through the Nyack Record Shop Project and Beacon Exhibition, other communities will use the occasion to cement ties between cultural organizations and community groups to celebrate artistic excellence and to use the visual arts as a tool to strengthen communities."

Dr. Frances Pratt, President of the Nyack Branch of the NAACP, organizes the annual Interfaith Martin Luther King Service at Pilgrim Baptist Church and is an active member of the Nyack Record Shop Project.  Dr. Pratt is encouraged by the breadth of diversity of the project's collaborative partners. "Dr. King’s message centers around equality for all by embracing an all-inclusive way of living,“ said Pratt.  “Nyack Village has adopted that philosophy as clearly demonstrated in our team efforts to preserve local African American History through this project.  When I find myself sitting in a circle with the Historical Society, the Chamber of Commerce, the NAACP and other groups at the Hopper House, I feel like we have found the beloved community that Dr. King gave his life to establish.”