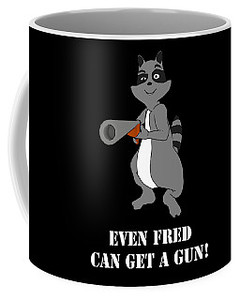 Just in time for summer, four of CGMuse’s award winning animated shorts will be available on the internet for free: Raccoon Trouble, The No Face Doll,Why The Nighthawk Has Such Beautiful Wings and Glooscap and The Baby.  All of them are now being released gratis two weeks apart, starting on Wednesday, April 25.  And anyone with access to an internet connection can enjoy them.

Together, the shorts have won honors at over thirty-one festivals internationally. This recognition led animator C. A. MacFinn and producer Clare Kohavi to consider ways they could give back to communities that had supported them through their art.  So they created CGMuse’s #RaiseMoneyForGood campaign, a project that donates to worthy causes through profits from a line of home goods and apparel tied in to their animated shorts.  “We’re interested in doing business ethically,” C. A. MacFinn said, “As artists and as a business, we want to be a positive force.  The #RaiseMoneyForGood campaign is actually putting our money where our mouth is.  Fifty percent of the profit from the first week of sales after each movie’s product launch will go to the associated cause, and 15% of all the profit after that.”

CGMuse chose the organizations that would benefit from #RaiseMoneyForGood to align with the movies’ themes and audience.  Three of the animated films are part of the Nyack animation shop’s series based on Native American stories; two were chosen in 2016 for a special screening at Mní Wičhóni Nakíčižiŋ Owáyawa (Defenders of the Sacred Water School) at The Water Protector's Camp in Standing Rock, North Dakota. Donations from those associated product lines will benefit the American Indian College Fund and indigenous education (https://collegefund.org/).  “Only 14% of Native Americans have a college degree; the smallest percentage of any American group,” said Ms. Kohavi, “By 2020, 65% of jobs will require post-secondary education.  With 30% of Native Americans under the age of 18, we wanted to help the tribal nations close the gap.”  Donations from Raccoon Troublemerchandise will go to help prevent gun violence through Sandy Hook Promise (https://www.sandyhookpromise.org/).  “We felt that, since a large portion of our audience are kids, we would donate to Sandy Hook Promise, since school shootings affect children and their families so horrifically,” said animator C. A. MacFinn.

Fans can track when each movie will be released by visiting CGMuse’s Facebook page (https://www.facebook.com/CGMuse/), CGMuse on Twitter at @cgmuseworks or CGMuse’swebsite http://cgmuse.com/.  Support the #RaiseMoneyForGood campaign by clicking on the Shop button at http://cgmuse.com/shop.html and buying mugs, t-shirts, towels, yoga mats and more with images from the movies.

CGMuse (http://cgmuse.com/) is an award-winning computer animation company based in Nyack, NY.  CGMuse's work has won honors and screenings in film festivals and conferences internationally, including film showings and honors at Athens Animfest in Greece, Canada Shorts Film Festival, Sydney World Film Festival, Australia and Mní Wičhóni Nakíčižiŋ Owáyawa(Defenders of the Sacred Water School) at Standing Rock; and selection for SIGGRAPH's Showcase for Innovative Mobile Apps ’14 and ’17 and NYC Game Expo at Microsoft.  Animated apps of CGMuse's making are available through iTunes® and are selling on every continent (except Antarctica!).

About The American Indian College Fund

Every year, The American Indian College Fund empowers more than 4,000 Native students to start and stay in school, complete their degrees and launch careers that benefit us all. They have provided almost 126,000 scholarships and $193 million to support Indigenous communities through educational initiatives which include research, early childhood education and native place-based leadership.  https://collegefund.org/

Sandy Hook Promise is a national non-profit organization founded and led by several family members whose loved ones were killed at Sandy Hook Elementary School on December 14, 2012.  The organization honors all victims of gun violence by providing programs and practices that protect children and prevent the senseless, tragic loss of life. https://www.sandyhookpromise.org/