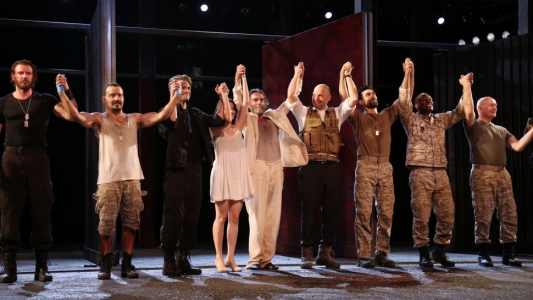 Troilus and Cressida at the Delacorte Theater, Central Park

For their second summer 2016 offering, the Public Theater are presenting a Shakespearean play that they have presented three times in their now iconic free series, which is doubly curious. I don’t know why Troilus and Cressida is being performed at all these days.  From the time it was apparently squeezed into the First Folio in 1609 to the late 1800s it had hardly been performed, not more than a few times in 270 years, always met with consternation and puzzlement.  That consternated puzzlement has not changed, although there are those who find it particularly fitting for present day consumption because we live in “interesting” times.

Basically, the story is about sex. Helen of Troy (beautiful Tala Ashe), so staggeringly beautiful and so sexually alluring she was the center of a war between two nations that lasted seven years.  Greek Helen, the wife, the queen of King Menelaus (Forrest Malloy), so inflamed the passions of Paris (Maurice Jones), a prince of Troy, that he snatched her off to Troy where they’ve been living lustily ever since.  Did Priam (Miguel Perez), King of Troy, tell his son, Paris, to get a grip, give her back to her husband who still wanted her?  No.  He and all of Troy endured endless deaths and atrocities at the hands of vengeful Greeks until, apparently, the Greek general, Agamemnon (sterling John Douglas Thompson), brother of King Menelaus, used his best wits to concoct the Trojan Horse – but you all know that story.  Which is a good thing.  Or a bad thing?  Because it isn’t in the play.

. Another part of the story that Shakespeare, a vigorous borrower, did not use in this play was the key fantasy  factor of the invincibility of the greatest of Greek warriors, Achilles.  He could not be killed. Except for that noted wrinkle, by his heel.  And yet, Achilles is very much in this play, portrayed this time around as a thuggish lout by Louis Cancelmi, who does an unfortunately credible job, quite the ugliest character in the play among a coterie of ugly characters.

We come to these beauties via Troilus and Cressida, two genuinely lovely characters. At least, at first. Unspoiled.  Later, far from. Troilus, King  Priam’s youngest son (endearing, forthright Andrew Burnap) is tremblingly in love with deliciously lovely Cressida ( beguilingly charming Ismenia Mendes) the daughter of Calchas (Miguel Perez, again) a priest of Troy.  Troilus is too shy  even to  approach her, but Cressida’s uncle, Pandarus (romping John Glover) a vintage Trojan lecher – that’s nice for “dirty old man” – gleefully throws them into each other’s arms, thence, to bed, the two of them swearing undying love and devotion.  Bliss all around.  But –

Antenor (Paul Deo Jr.) a Trojan warrior captured by the Greeks, would be traded back to the Trojans for a nubile Trojan girl, namely, our dear Cressida, the daughter, and the property of Calchas, the priest.  Who agrees to offer her in the trade.  For Troy. It’s a good deal, a seasoned warrior for an unseasoned girl. And from this point on, Shakespeare’s plots in his story compound, giving director Daniel Sullivan who gave us a superb Merchant of Venice the colossal headache of whether to try for depth, his forte, or clarity, a vital necessity firmly addressed electronically   here among the crowds in the Delacorte, the combination apparently out of reach, since logic does not figure strongly in Shakespeare’s design of his play.  Shakespeare just piles stuff on, brilliant flashes of beauty among deliberate vulgarities and  excesses.

Just as Shakespeare did in his time, Sullivan  thoughtfully stages the play in modern dress not only for practical reasons but psychological.  Designer David Zinn emphasizes military brutality.  So does Sullivan.  We understand military brutality, we’ve become experts.  This is our avenue into understanding the lies, the perfidy, the treachery, the vileness we are capable of and thus, so, too, the characters of the play.  Who needs a Trojan Horse to show the way?  We have the wily Ulysses (clear, strong Corey Stoll) to lead the way, who pits the leading Trojan fighter, Hector (splendid Bill Heck) against the leading Greek warrior, the mighty dolt Ajax (delightfully asinine Alex Breaux) as a substitute for the muscular, pouting Achilles, still not willing to fight.  The two sides, Troy and Greece, have finally decided to end the war through the device  of their two champions alone fighting for their respective kingdoms.

And Ulysses plots a way to get Achilles the invincible to fight, knowing then that the Greeks will win. Simple.  He kills Patroclus (Tom Pecinka) the lover of Achilles.  Of course, you know what happens.  There’s lots of strum und drang, because Sullivan and Shakespeare need throngs  of staged slaughter for  a bang up finish which two warriors clashing alone do not provide.   The smoke is ferocious.

And what of Troilus and Cressida?  Oh, them. Collateral damage.  So much for undying love. It’s a bitch of a play.

One of the oddest of Shakespeare’s “problem” plays gets a lusty airing in balmy Central Park.