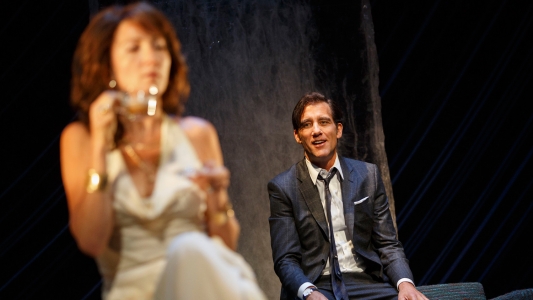 Since we all know from long experience of Pinter plays that with very few exceptions we are gathered here to admire, not to enjoy, our role is pre-defined. How to make the admiration roll out differently is the task at hand for director Douglas Hodge and company and all have put their shoulders to the wheel. Constance Hoffman has provided spot on readable costumes, lighting designer Joseph Weideman has a field day, Thom Yorke’s throbbing music supplies  premonitory subtext. And a dab hand at the task is set designer Christine Jones who simply bowls us over at the outset by plonking us at the edge of the cosmos, the tracks of celestial bodies pulsating in concentric circles in vasty space, their melting colors fluctuating over the suddenly tiny set below and the tiny people in it, two women on two couches, a man in an arm chair, and sharing space with them a glacial block of ice as a doorway into that huge, brooding sky.

The man, Deeley (Clive Owen) speaks.  Maybe one word.  The woman, Anna (Eve Best) in clinging white, couch right, speaks. Probably replying. Must be. After all, she doesn’t have to look at him to respond, does she. Kate (Kelly Reilly) Deeley’s wife, couch left,  claustrophobic red mane of hair, listens at first. Or not.  The conversation diddles along, doled out strategically by Machiavellian author Pinter to reveal enough to raise questions, not enough as answers.  But we who are here are used to that.  It’s Pinter. We’re already at work doing what you do at a Pinter play: catch the clues, then fill in what’s what, what’s not. Or not.  Doesn’t matter if each one in the audience has the same fill-ins.  What matters is that we’re doing it.

We have enough now, to say that Anna and Kate knew each other, even lived together. Perhaps.  Or, surely. And Deeley is starting to wake up to the vague possibility that he’s the fulcrum in a situation.  Or not.  He gives it a shot.  He uncrosses his legs aggressively. Both women recognize the significance of his crotch shot but glide past the moment, neither reciprocating with a counter attack. In fact, each of them crosses her legs, silkily, provocatively, but the barriers are up. For now.

We have enjoyed that.  Oh, not the words, they’re not the point. We don’t know if we believe that Anna used to know Kate years ago, has traveled all this way to be with Kate, leaving her rich husband behind in their home in Africa. Or not. Aha. Kate has uncoupled her legs and staged a couple of possessive moves toward Deeley staking out parameters.  But Anna is flickering her mind through memories real and unreal and is not acknowledging Kate’s silent ownership declarations. Deeley likes the upping of sexual tensions all around but makes no too obvious moves.  He doesn’t have to.  Let the cosmos do it.  Or not. And thus it goes.

Roundabout Theatre has placed great placards in the main lobby for the reading pleasure of attendees charting their devotions to Pinter over the years.  The large audience, respectful, awed, attentive, pays tribute as well.  That Owens, Best and Reilly do very little to deserve this adulation is somehow beside the point. The point is Pinter. Sir Harold must be smiling down from whatever heaven he chose to be in. Or not.

A beautifully produced tribute to the most powerful enigma in the current Theater including a stage debut of movie star Clive Owen.