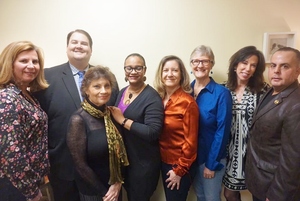 Support Connection, Inc., a not-for-profit organization that provides free support services to those affected by breast and ovarian cancer, is pleased to announce the recipients of their 2017 Spirit Awards. The award presentation will take place during Support Connection’s Spring Benefit on Friday, April 7, 2017 at Villa Barone Hilltop Manor, 466 US-6 Mahopac, NY.

The Spirit Awards are given each year to honor those who demonstrate dedication to the organization’s mission by providing inspiration, time, talent and other resources. This year’s Spirit Award recipients are:

JANE CROSSLEY AND VALERIE PEYRONNET, PUTNAM VALLEY: SPIRIT OF GIVING AWARD. Presented to those who give of themselves in extraordinary ways to further Support Connection’s mission.

ELIZABETH AND ERIC DIBARTOLO, YORKTOWN HEIGHTS: SPIRIT OF PHILANTHROPY AWARD. Presented to those who show exceptional generosity and civic responsibility through contributions of time, effort, and resources to Support Connection.

CHEREESE JERVIS-HILL, CORTLANDT MANOR: MARIA RUBINO JENNINGS SPIRIT OF CARING AWARD. Given to someone who follows the example established by Maria: This award is presented in honor and memory of Maria who helped create Support Connection’s Peer Counseling program and other services. Making a positive difference in many lives through the power of caring

GARY WAWRZYCKI, GARRISON: SPIRIT OF COMMUNITY AWARD. Presented to honor someone whose efforts and actions make a huge difference to Support Connection and the community.

Gary became involved with Support Connection in 2012, and his efforts and actions have made a huge difference. Gary has enthusiastically spread the word about Support Connections services, helping them reach out to many people in need of their support. In addition, because of his efforts, Gary’s employer, Wells Fargo, has sponsored numerous events and has also donated nearly $20,000 in community grants. Gary encourages his fellow employees to volunteer. At the recent Support-A-Walk, the walkers were thanked by Wells Fargo team members who greeted them at the finish line. Gary is a gift to Support Connection and the entire community.

SPIRIT OF HOPE AWARD: This award is presented to honor individuals who offer inspiration to other cancer survivors. They have taken their own experiences and translated them into an opportunity to raise awareness about Support Connection’s mission. This year there are two recipients:

Ginny first reached out to Support Connection in 2011, after being diagnosed with ovarian cancer. She is an inspiration to those blessed to know her; using her own journey, she encourages people to seek support while living each day to the fullest. As a 2013 Support-A-Walk Ambassador, Ginny shared her story to encourage others experiencing cancer: “If there’s one person I can inspire to ask for help, I want to do that. It’s hard to ask for help, and I want people to know there’s someplace they can go.” Ginny is also a Community Ambassador for Support Connection's Annual Support-A-Walk and a proud team captain of Team Wish Upon A Star. She works tirelessly knowing that the money raised from the Walk funds Support Connection’s free services. Ginny touches many lives and is truly a gift to Support Connection and the many people who rely on them.

Dottie reached out to Support Connection in 2005, after being diagnosed with breast cancer and has been a staunch advocate for Support Connection ever since. She wants women and their families to know that there is a place to turn to for support, education and comfort. It is not surprising that Dottie accepted Support Connections offer to be a 2016 Support-A-Walk Ambassador, where she shared her story to encourage others experiencing cancer: “It gives me great pleasure to give back to an amazing organization I truly believe in and that played a major role in my mindset during my own battle with cancer. I hope to be a positive role model for other women facing this disease.” Through her efforts, she helped Support Connection promote the Walk and raise money to help fund their numerous free programs and services. Dottie is a treasure to Support Connection and the many lives she touches.