Lecture on Dolphin Intelligence on Oct. 9 at The Maritime Aquarium 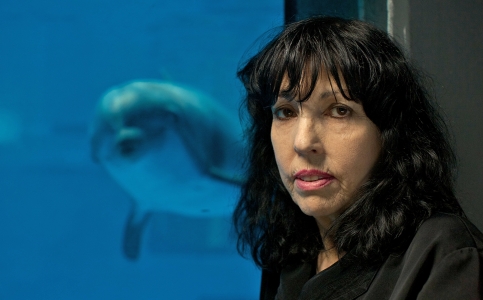 NORWALK, CT â How smart are dolphins? How can we find out? And, once we know, what do we do with that information?

Dr. Diana Reiss, who pioneered using underwater keyboards to discover how dolphins think, will answer those questions in a special talk on Thurs., Oct. 9 at The Maritime Aquarium at Norwalk.

Long known to be personable and trainable, dolphins were given even more credit than is reasonable through popular culture. Flipper saved the day each week on TV in the mid-1960s, and George C. Scott trained two animals to talk in the 1973 film âThe Day of the Dolphin.â

Despite these fictional exaggerations, recent research has revealed that dolphins indeed do have complex communications and social structures. And that dolphins arenât always that nice â to each other, to other marine animals or to us.

Dr. Reiss is among the scientists trying to get inside the minds of these charismatic marine mammals. She is a cognitive psychologist, marine-mammal scientist and professor in the Department of Psychology at Hunter College, CUNY, and in the Animal Behavior & Comparative Psychology Doctoral program at The Graduate Center, CUNY.

Her research focuses on dolphin cognition, communication, comparative animal cognition and the evolution of intelligence. Dr. Reiss pioneered the use of underwater keyboards with dolphins to investigate their cognitive and communicative abilities. Working at the National Aquarium in Baltimore and the National Zoo in Washington, DC, she and her colleagues also demonstrated that bottlenose dolphins and Asian elephants possess the rare ability for mirror self-recognition previously thought to be restricted to humans and great apes.

Her advocacy work has focused on the protection of dolphins from the tuna-fishing industry and efforts to bring an end to the killing of dolphins in Japan that were exposed in the Oscar-winning film âThe Cove.â

Her book, âThe Dolphin in the Mirror,â was released in 2011.

Dr. Reissâ talk will begin at 7:30 p.m. in the IMAX Theater of the popular Connecticut family attraction.