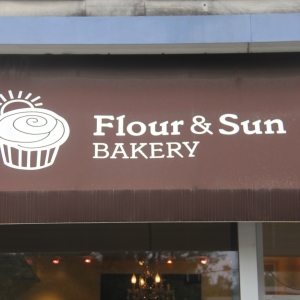 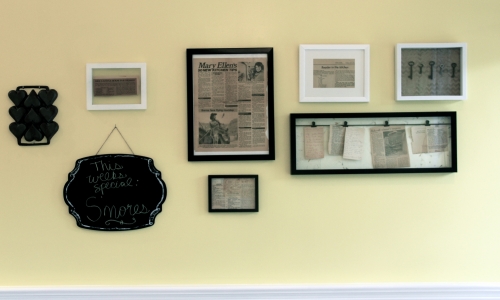 Twenty-six year-old Cait Dwyer, the shops’ head baker since December 2011, adds proprietor to her résumé. Dwyer receives the handoff from Denise Treco, who led the bakery to numerous honors, since she opened its doors in February 2009. The shop received recognition from Westchester Magazine for “Best Cupcake” (2009, 2010, 2014), was named “Best Bakery” by Westchester Health & Life Magazine  (2011) and one of the 5 Best Bakeries in Westchester by CBS NY  in 2012.

Dwyer holds degrees in Baking and Pastry Arts and Food Service Management from Jonson & Wales University in Providence, Rhode Island. She began her career at Flour & Sun working the front of the house but put on her baker’s apron within her first year. Baking has always been a family-affair for Dwyer. She has warm memories of baking in her family’s kitchen with her great-grandmother and grandmother. Recipes and clippings passed down to her by these women now serve as art at the re-decorated shop. Therese Olsen Dwyer, Cait’s mother, a graduate of Pleasantville H.S. will be her bookkeeper.

Dwyer continues Trecos’ artisan philosophy, using fine locally sourced ingredients  (including milk and eggs from the fourth-generation dairy folk s at Wades Dairy in Bridgeport, CT.), baking from “from scratch,” creating her own fillings, and forsaking preservatives. A core of six types of cupcakes will be available every day with featured flavors moving on and of the menu. Adding to the bakery’s repertoire Dwyer will bake muffins, cakes, and cookies by the pound, daily. Coffee, bottled beverages, and breakfast fare will also available. Dwyer will introduce sweet crepes to her menu later this month.

To welcome her customers and celebrate the earlier opening time Cait will give you a free cup of coffee (one per person) if you stop by to say hello between 9am - 10am this week only.