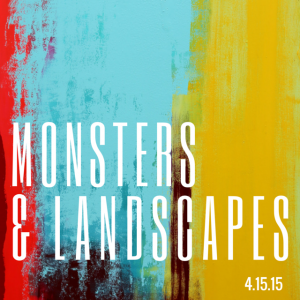 Join us at Serendipity Labs Rye Wednesday, April 15th from 6pm-8pm for the opening reception of "Monsters & Landscapes" by Ryan Piers Williams.

Ryan Piers Williams is an American Filmmaker and artist born and raised in El Paso, TX. Upon graduating from the School of Cinematic Arts at the University of Southern California, Williams began his work in the film industry working for Steven Soderbergh and George Clooney on several productions including; Ocean’s 12, Ocean’s 13, and Goodnight and Good Luck.

In 2010 Williams wrote and directed his first feature film, The Dry Land, which premiered at the 2010 Sundance Film Festival and was released theatrically later that year. Most recently, Williams wrote, directed, produced and acted in his second feature film, X/Y, alongside his wife, America Ferrera. X/Y debuted at the 2014 Tribeca Film Festival and was theatrically and digitally released on March 6, 2015.

While defining himself as a filmmaker, Williams chose to expand upon the themes commonly found in his films through the use of various mediums including paint and photography. His art provides him with an opportunity to express and interact with his audience in alternative ways.

The convergence of film and art is readily apparent in Williams’ works. Drawing his audience into his artistic journey he invites them to engage with his work in a deep and meaningful way. Through the use of multiple mediums including canvas and video he seeks to examine both the serene and caustic sides of human nature in his artwork. This theme serves as the basis for his Monsters & Landscapes series.

Complimentary event. Wine and hors d'oeuvres will be served.