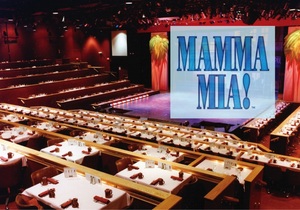 Inspired by the storytelling magic of ABBA’s songs from “Dancing Queen” and “S.O.S.” to “Money, Money, Money” and “Take a Chance on Me,” Mamma Mia, is a celebration of mothers and daughters, old friends and new family found.  Following the production’s epic 14-year run on Broadway. Mamma Mia!  is on the WBT stage  March 23 through June 25, 2017.

And some songs with STIG ANDERSON

Directed and Choreographed by MARK MARTINO

Mamma Mia! tells the story of Donna Sheridan, an independent, single mother who is about to give away Sophie, the spirited daughter she’s raised alone on an idyllic Greek island. For Sophie’s wedding, Donna has invited her two best girlfriends to celebrate the occasion, but Sophie has secretly invited guests of her own – three men from Donna’s past … in the hopes that one of them will be the father she’s never known. Over 24 chaotic hours, new love blooms and old romances are rekindled on this lush island full of possibilities.

Mamma Mia! is one of the most successful musicals of all time, the eighth longest-running show in Broadway history.  The West End production is now in its eighteenth year. To date the show has been seen by over 60 million people worldwide in 50 productions in 16 different languages.

Michelle Dawson is Donna, the former lead singer of a ’70s girl group and free spirit who now runs a tourist villa on the island. Mariah MacFarlane, is Donna’s daughter Sophie.  Donna’s best girlfriends from her one-time backing band, Donna and the Dynamos, are Elise Kinnon as wealthy, multi-divorcee, Tanya and Jennifer Swiderski as the practical and no-nonsense feminist, Rosie

The trio of middle-aged potential dads are Xander Chauncey as Sam Carmichael, the New York City architect who has always held on to his torch for Donna.  Brent Bateman as the devoutly single writer and adventurer Bill Austin, and Kilty Reidy is the wealthy British financier Harry Bright.

Nathan Cockroft is Sophie’s fiancé Sky. His goofball buddies, Pepper and Eddie, are played by Connor Wince and Matty Rickard.

Supporting Sophie through her journey of self-discovery are her best friends Ali and Lisa, played by Sydney Patrick and Cameron Anika Hill, respectively

Michelle Dawson and Xander Chauncey return after appearing as co-stars in our production of Jekyll & Hyde.  Michelle has appeared in many productions at WBT, including, The Sound Of Music, The Wizard Of Oz, and Saturday Night Fever. Xander also appeared in Titanic and  It Happened One Christmas Eve.

Ticket Prices Dinner & Show range between $56.00 and $84.00 PLUS TAX depending on the performances chosen. Beverage Service & Gratuities are not included in the ticket price. Discounts are available for children, students, and senior citizens at selected performances. Also check the website for on-going Special Offers! More news at: www.BroadwayTheatre.com