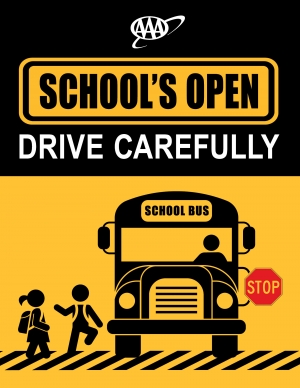 The New York State Police from Troop K urge motorists to support AAA’s annual “School’s Open—Drive Carefully” campaign to help preserve the safety of children traveling to and from school.

AAA’s yearly “School’s Open—Drive Carefully” campaign alerts motorists to the special risks to school-age children from motor vehicle crashes, the leading cause of death for children from five to fourteen years old. The campaign begins on September 6, 2016 and ends on October 14, 2016.

Superintendent George P. Beach II said, "As the school year starts once again, the New York State Police remind motorists to be on the look-out for children boarding buses and walking to and from school. Please, drive carefully and be especially aware of school speed zones, school bus traffic, and children walking.”

Major Robert M. Nuzzo stated, “As schools from the Columbia, Dutchess, Putnam and Westchester Counties open their doors this September, we encourage everyone – motorists, parents, and students – to be aware of their traffic safety practices.  Slow down, be alert, and avoid in-car distractions so children can make it to school and home safe to their families.”

Motorists will receive an additional reminder each time they see one of the “School’s Open” bumper stickers on State Police vehicles, as well as other official vehicles, school buses and passenger cars.

State Police also emphasize the need to show extra caution when driving as schools reopen, since it is then that vacation-minded children are apt to be less careful.  Motorists should be particularly alert for children darting out between parked cars on busy streets.