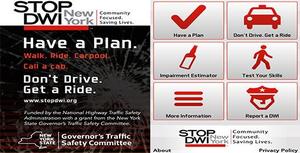 The New York State Police will increase patrols to crackdown on drunk driving and underage drinking through the Halloween holiday.  The effort will begin on Friday, October 27, 2017 and continue through Wednesday, November 1, 2017.

In an effort to keep this Halloween safe and prevent needless tragedies caused by impaired and distracted drivers, the New York State Police will conduct a special traffic enforcement effort during the upcoming weekend and through Halloween. Troopers will be vigilant in keeping drunk and reckless drivers off the roadways.  State Police will also conduct underage drinker enforcement details statewide.

Superintendent George P. Beach II said, “Halloween can be a fun holiday, but it can also be deadly when someone makes the wrong choice to drink and drive. Children and their parents will be out walking and we urge drivers to be aware of this and exercise caution. Our message is simple: Never drink and drive. Troopers will be out in force to ticket and arrest those who threaten the safety of our roadways and endanger the lives of those who travel them.”

Motorists who are traveling this weekend can expect a number of sobriety checkpoints and additional DWI patrols. Law enforcement will also be looking for motorists who are using their phones and other electronic devices while behind the wheel. Drivers should also remember to “move over” for stopped emergency and hazard vehicles stopped on the side of the road. State Police will also be targeting the illegal sale of alcohol to minors.

Troopers will be using both marked State Police vehicles and Concealed Identity Traffic Enforcement (CITE) vehicles as part of this crackdown in order to more easily identify motorists who are violating the law. CITE vehicles allow the Trooper to better observe driving violations.  These vehicles blend in with every day traffic but are unmistakable as emergency vehicles once the emergency lighting is activated.
The National Highway Traffic Safety Administration reports that nationwide pedestrian fatalities are at their highest in 26 years with 5,987 fatalities in 2016. Halloween is a particularly deadly night due to the high number of impaired drivers on the roads.

During last year’s initiative there were 1,142 accidents, more than 166 of which resulted in someone being injured. Four people were killed.  Troopers also arrested 245 people for DWI and issued more than 12,327 tickets for speeding, distracted driving and other traffic violations.

The GTSC and the NYS STOP-DWI Foundation have made the “Have a Plan” app available to allow people to locate and call a taxi or ride share service, program a designated-driver list, and educate themselves on Blood Alcohol Content levels.  It also provides information on DWI laws and penalties and even enables app users to report a suspected impaired driver.  The app is free and available for Apple, Andriod, and Windows smart phones.  You can download the app here.