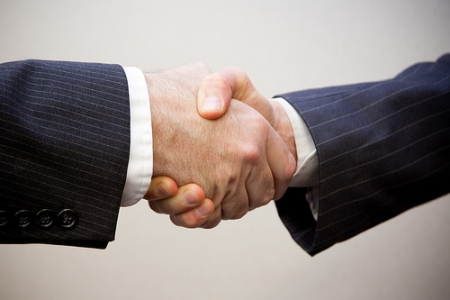 Today is National Handshake Day! Have you ever wondered about the origin of handshakes? Ancient ruins and ancient texts show handshaking was practiced at least as far back as the fifth century BC in ancient Greece.

During medieval times, when most men were covered in armor, the handshake was one way to determine if someone was a friend or foe. If one male extended an open hand to another, this meant an extension of friendship and the gesture would be returned. The alternative was not as good.... if a hand was extended with a dagger or sword, it meant you better get ready to fight for your life.

A handshake is a significant gesture in business and in life. It can be a greeting, a business agreement and a thank you.

The American handshake is very simple and used as a greeting between friends or new acquaintances. The right hand is extended, thumb up and palm flat. You grasp the other person's hand using a firm grip, with your palm on their palm. Hands are pumped two or three time in a vertical motion and then, you release the grip. Do it too hard, and you are seen as aggressive. Do it too softly, and you are seen as a bit of a wimp. A firm steady handshake can often tell a future employer a lot about your confidence.

In China, a weak handshake is actually preferred and it is customary to hold the handshake for an extended time, while in some Muslim countries (such as Turkey or the Arabic-speaking Middle East), a too firm handshake is considered rude.

In Japan it is normal to shake hands frequently. Sometimes a bow is included or substituted. In South Korea, the older person is expected to initiate the handshake, where it is also preferred to be weak. It is also a sign of respect to grasp the right arm with the left hand when shaking hands there.

Islamic custom has it that shaking hands is the practice of the Prophet Mohammed as well as a sign of welcome. In India and Pakistan, people shake hands by grasping your hand in both of their hands and holding your hand briefly.

Austrians are a very friendly bunch, offering handshakes to children as well as adults when they first meet. A strong handshake and good grip are appreciated in South Africa. Russians shake hands frequently but never while wearing gloves.

Some cultures even have a habit of shaking both hands. In France and Italy, it is customary to shake hands every time you meet someone. In some cultures, the handshake may end with open palm of the hand being placed on the heart.

In some religions, such as Orthodox Judaism and Islam, physical contact between men and women is prohibited. In general, men exchange handshakes with other men and women with other women. In place of a handshake, it is appropriate to give a short nod of your head. In Switzerland, it's quite different. One is expected to shake women's hands in company first.

In Morocco, people give one kiss on each cheek (to those of the same gender) together with a handshake while in Sudan, people who know each other offer a good pat on the shoulder of the other before shaking hands.

During the 2012 Olympics in London, the handshake even made headlines. According to the Mirror, the British Olympic Association's head doctor advised British athletes not to shake their rivals' hands in case they might catch an illness. He warned athletes that any illness picked up during the stressful environment of the Olympics could affect performance and with the "no handshake edict," the Brits came across as a bit snobbish to the rest of the world.

In 1977, Atlantic City Mayor Joseph Lazarow was recognized by the Guinness Book of World Records for shaking more than 11,000 hands in a single day as part of a publicity stunt. President Theodore Roosevelt had previously held the record with 8,513 handshakes at a White House reception in 1907.

So in honor of National Handshake Day, go over and surprise someone and shake their hand and tell them what today is. You might just make their day! Pass it on!