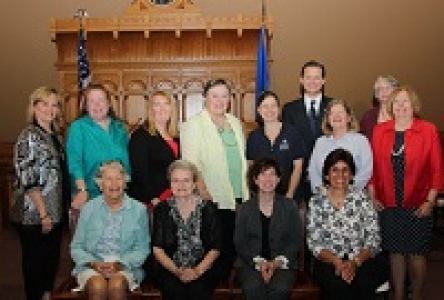 Tolland, CT –The spotlight was on 12 remarkable women Thursday at the State Capitol as Connecticut's Conservation Partnership recognized them for their work in agriculture and natural resources conservation.

This year's theme was Celebrating Women of Character, Courage, and Commitment: Stories of the Extraordinary Determination of Women, and honored the exceptional and often unrecognized determination and tenacity of women in a non-traditional field.

Sponsored by two USDA agencies – the Natural Resources Conservation Service and Farm Service Agency – along with the Connecticut Association of Conservation Districts, nominations for the awards were solicited from partners and the general public. Six were selected for top honors, while six received honorable mentions. All received recognition from Lt. Governor Nancy Wyman who was on hand again this year as presenter. Those acknowledged included:

Amy Blaymore Patterson, Executive Director for the Connecticut Land Conservation Council. Under her leadership, the CLCC has grown and become an important voice statewide for the conservation community.

Sidney Van Zandt, who has been a leader in environmental conservation since 1967 when she spearheaded the effort to save 1,000 coastal acres of Haley Farm State Park and Bluff Point State Park & Coastal Reserve. She currently serves as Vice President of the Groton Open Space Association; and in the past, was President of the Avalonia Land Conservancy, and board member of the Connecticut Forest & Park Association.

Joan Nichols, Owner of Nichols Logging and Forestry Management/Director of the Connecticut Professional Timber Producers Association. Nichols also serves on the Connecticut Forest Practice Advisory Board; and has been the Volunteer Tree Warden for the Town of Lebanon for 20+ years.

Norma O'Leary poses with her award with Lt. Governor Wyman and members of the Conservation Partnership.

A Special Lifetime Achievement Award was presented to Norma O'Leary who has devoted her life to promoting and expanding sustainable agriculture. For many years she worked on the family dairy farm. After retirement she became an advocate, working tirelessly to educate and promote agriculture in Connecticut. She has served as a board member at the state, regional, and local levels with almost every organization dedicated to agriculture and natural resource conservation. For many years, O'Leary sought to build capacity at the local level by formalizing agriculture's voice in municipal affairs. From her efforts, the AGvocate Program was born. Since then, more than 20 Connecticut towns have established formal agriculture committees/commissions, and have made great strides in creating farm-friendly policies and regulations.

"Since its inception last year, the Women Inspiring Conservation in Connecticut Awards has grown tremendously," said NRCS State Conservationist Lisa Coverdale. "This year NRCS was joined by FSA and CACD in sponsoring the event. We can see the growth, and the growth-potential, by the number of nominations we received this year. Now we're excited to see what 2015 will bring as women become more of a fixture in the fields of agriculture and conservation."