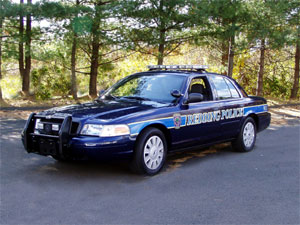 Update: In July of 2010, an incident occurred in Redding in which a 16 year old sexually assaulted a juvenile victim. He was discovered in California serving in the U.S. Marines and was taken into custody 6 weeks ago by the San Bernadino County Sherrif's Department. At the request of Redding Police, his custody was transferred to U.S. Marshals. He has been in transit for the past 2 weeks, and was deposited at federal holding facility in Brooklyn last night. As of today, two Redding officers brought him from brooklyn to Redding's holding cells. Bond has been set at 100,000. The offender is charged with sexual assault in 1st degree, risk of injury and illegal sexual contact with a minor (1 count) and risk of injury to a minor.

On 7/29 at 10:21 pm, Officer Livingston responded to a call regarding a fight that had broken out at the Lumberyard Pub. An unruly person had refused to leave, then started a fight. Both parties had left the scene before Livingston arrived, and could not be located.

On 7/31 at 8:45 am, Officer Brennan responded to a 3 car accident on Rt. 7. Vehicle 1, operated by Megan Lamothe, 37 of Norwalk, was traveling North when it crossed left of center and side-swiped two other vehicles. Those vehicles were operated by Jose Maldonado, 42 of Bridgeport, and Paul Matthews, 34 of Brookfield. The incident is still under investigation.

On 7/31 at 9:18 pm, Officer O'Connor pulled over a vehicle after his license plate reader registered a suspended registration. The driver, Cristiano Christofoleti, 29 of Danbury, was charged with operating under suspension and operating without a license. His court date is 8/9.

On 8/2 at 2:03 pm, found property on Rt. 107 was reported to the police. A garment bag with men's dress clothes and a box of golf balls was found hanging on a tree along Rt. 107. Anyone wishing to claim the bag should contact Lieutenant O'Donnell.

On 8/3 at 2:26 am, Officer Heibeck stopped a vehicle on Rt. 53 after observing a missing light. The driver was discovered to be driving with a suspended license. Patrick Burns, 22 of Redding, is scheduled to appear in court on 8/21.

On 8/5 at 11:26 pm, Officer McManus observed a vehicle stopped at stop sign for a prolonged period of time, then followed the vehicle and observed erratic operation. After pulling the vehicle over, the driver failed sobriety tests and was found to be driving with a suspended license. In addition, Officer McManus located marijuana and a pipe in the car. The driver's B.A.C. was 2.5 times the legal limit. McManus arrested the 26 year old male, Brent Arrowitz of Bethel on charges of DUI, operating a vehicle with a suspended license, possession of marijuana, and possession of drug paraphernalia. Arrowitz will appear in court on 8/20 and was released on a $100 bond.

A crash that happened earlier this year on May 4th has resulted in charges. At 1:25 in the morning, a vehicle traveling northbound on Rt. 107 lost control and struck a tree. The driver was transported to the hospital immediately, as well as two passengers. The RPD issued a search warrant to obtain her medical records, and discovered that she was driving over the limit. The driver, Cristina Giglio, 23 of bethel, has been charged with DWI and 2 counts of assault in the 3rd degree. She was released on a $100 bond, and is scheduled to appear in court on 8/23.