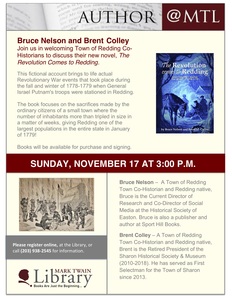 Author Talk at Mark Twain Library: The Revolution Comes to Redding on Sunday, Nov. 17 from 3 to 4pm.

Don’t miss the opportunity to learn about the American Revolution in Redding, Connecticut, during this book talk by co-authors and Redding town historians, Bruce Nelson and Brent Colley! Based on the 1778 journal of a fourteen-year-old boy named Jonas Fairchild, The Revolution Comes to Redding is a fictional account of actual Revolutionary War events that took place during the fall and winter of 1778-1779 when the troops under General Israel Putnam’s command were stationed in Redding. This is not an account of the battles that led to the ultimate victory of the Continental Army, but rather an account of the sacrifices made by the ordinary citizens of a small town where the number of inhabitants more than tripled in size in a matter of weeks, giving Redding one of the largest populations in the entire state in January of 1779!