Details
Published on Tuesday, 08 September 2020 18:15
Written by The Ridgefield Playhouse 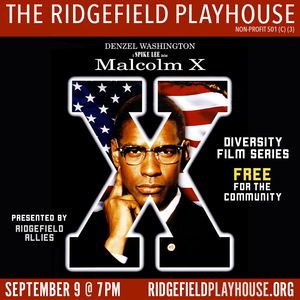 Anchored by a powerful performance from Denzel Washington, Spike Lee’s biopic of the controversial black activist and leader of the struggle for black liberation, Malcolm X, is heavily inspired by Alex Haley’s The Autobiography of Malcolm X.  After each film will be additional bonus content, that will consist of an interview led by entertainment reporter Cheryl Washington. In addition to being shown after the film in the theater, our bonus content, sponsored by People’s United Bank, will also be available on the Playhouse YouTube channel for anyone not attending the screening to watch from home.

The bonus content for Malcolm X will consist of an interview with actors Giancarlo Esposito and Sharon Washington, who portray Thomas Hayer and Augusta in the film.  Best known for his role as Gus in the hit show “Breaking Bad”, former Ridgefield resident Giancarlo Esposito is a double Emmy Award nominee this year for his work on “Better Call Saul” and “The Mandalorian.” Esposito can also be seen in Amazon Prime’s series “The Boys.”  The actors will discuss their roles in the film,  talk about the impact that the film has had and how it translates into what we are seeing in society today.

Upcoming screenings and interviews include Tony Award winner LaChanze following The Color Purple on September 16 presented by ACT of CT; Jazz musician Christian McBride following Blue Note Records Beyond the Notes on September 23rd presented by The Ridgefield Symphony Orchestra, Emmy Award winner and television legend Dick Cavett following I Am Not Your Negro on September 30 presented by the Ridgefield Library, among others. These screenings are made possible thanks to the generosity of Ridgefield residents Anita and Nick Donofrio, Ann and Steve Carlson, Allison and Jon Stockel, Julie and David Peck, and Daniela Sikora and Keitha Kinne.  To see the entire Diversity Film Series line up visit The Ridgefield Playhouse website or call (203) 438-5795.  Tickets are free but must be reserved by calling the box office.  Through these films and conversations, we hope that we can all become better allies.