Mark Twain Library and the Redding League of Women Voters are proud to present Conversations: Truth, Myth & Democracy on March 4 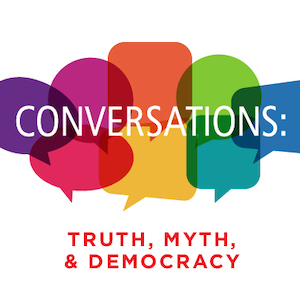 The Mark Twain Library and the Redding League of Women Voters are proud to present “Conversations: Truth, Myth & Democracy.” This virtual discussion between acclaimed historian Dr. Jelani Cobb and renowned philosopher Dr. Jason Stanley will be held on Thursday, March 4th at 7:30pm.

The program will be moderated by award-winning journalist Tina Rosenberg and examines the underlying meaning of our democracy and how democracy can matter even when we have very different ideas about what it should look like.

“It is essential to engage in sustained conversations daring to ask, ‘How do we know what we know and who told us? And, when they told us, did they tell the truth?,’” said Tom Kilbourn, ordained Episcopal priest and a member of the Redding League of Women Voters. “These conversations must be grounded in intellectual authority with tested thoughts and ideas placed attentively on the side of the scale for justice and mercy and common humanity.”

At a time when American democracy has been challenged by the questioning of truth and the fostering of myth, this program is devoted to exploring how caring citizens from disparate groups can find common ground through informed dialogue and civil discourse. This series of conversations was inspired in part by the polarization and divisive nature of the last year. The intent is to better understand the world we currently live in by inviting renowned historians, philosophers, social psychologists and journalists to share their knowledge and exchange ideas about what, why and how issues are pulling us so far apart.

“The intent of these collaborative conversations began as a way to offer our community an opportunity to further the discussion on race in a safe and healthy environment,” said Mark Twain Library Adult Program Coordinator Elaine Sanders. “In partnership, we have expanded the conversation in the hopes of fostering civic and civil dialog.”

This program follows a number of collaborative conversations organized by the Redding League of Women Voters and the Mark Twain Library that began in the Fall of 2019 with a then in-person series of talks with Williams College professor Charles Dew about his memoir, The Making of A Racist: A Southerner Reflects on Family, History and the Slave Trade. That event inspired a number of programs in 2020 - both live and virtual - from author talks to discussions such as that of Ava Duverny’s powerful documentary “13th.”

This particular program launches a series that will focus on addressing the difficult issues of truth telling and myth busting within our democracy by bringing much-needed community conversations to help promote education, informed dialogue and civil discourse. The series is brought to you in association with Easton Public Library, Weston Public Library, Friends of the Weston Public Library, Newtown’s C.H. Booth Library, The League of Women Voters of Weston and The League of Women Voters of Northern Fairfield Count; and, in partnership with media sponsor WSHU Public Radio.

Register for this Conversation online at: www.marktwainlibrary.org or call the Library at 203-938-2545 for information.

Dr. Jelani Cobb is a historian, author, journalist and professor who focuses on race, the police, and injustice. He currently teaches at Columbia University’s Graduate School of Journalism and serves as a Frontline correspondent and New Yorker staff writer. Dr. Cobb’s most recent book is The Substance of Hope: Barack Obama and the Paradox of Progress. He was a 2018 Pulitzer Prize Finalist in Commentary and won the 2015 Sidney Hillman Prize for Opinion and Analysis Journalism. Dr. Cobb is prominently featured in the Oscar-nominated documentary13th, about the current mass incarceration of black Americans, which traces the subject to its historical origins in the Thirteenth Amendment.

Dr. Jason Stanley is a philosopher, author, professor and expert on fascism who writes about authoritarianism, propaganda, free speech and mass incarceration, among other topics. He is currently a professor of philosophy at Yale University and contributes articles to The New York Times, The Washington Post, The Boston Review, The Guardian and other publications. His most recent book is How Fascism Works: The Politics of Us and Them. Dr. Stanley is winner of the 2007 American Philosophical Association book prize and the 2016 PROSE award for the subject area of philosophy.

Tina Rosenberg is an award winning journalist and author who writes about political violence and how new democracies deal with the crimes of past dictatorial regimes. For ten years she was a member of the New York Times editorial board writing editorials on foreign affairs. Her popular New York Times column, “Fixes,” focuses on exploring solutions to major social problems. Rosenberg is winner of the National Book Award and the Pulitzer Prize and co-founder of the Solutions Journalism Network, which spreads her passion for rigorous reporting on solutions to social problems. Her most recent book is Join the Club: How Peer Pressure Can Transform the World. Her mother lives here in Redding.

The League of Women Voters, a nonpartisan political organization, encourages informed and active participation in government, works to increase understanding of major public policy issues, and influences public policy through education and advocacy.