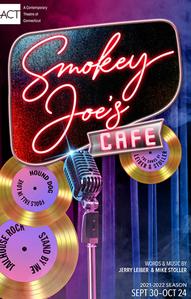 One of Broadway’s longest-running hits, SMOKEY JOE'S CAFE- THE SONGS OF LEIBER AND STOLLER - is a celebration of legendary songwriting team Leiber and Stoller, who virtually invented Rock ’n’ Roll.

This high-energy and fast-paced show features nearly 40 of the greatest songs ever recorded including “Jailhouse Rock", "Stand By Me", “Yakety Yak”, “Hound Dog,” “On Broadway,” “Spanish Harlem” and many more. SMOKEY JOE'S CAFE is not only a fun-filled night of 1950’s Rock n’ Roll, it's electrifying musical theatre that will leave you flying high!