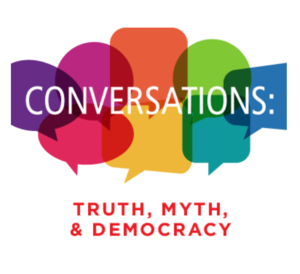 Professor Anthea Butler, who is the Geraldine R. Segal Professor in American Social Thought at the University of Pennsylvania, will be in conversation with WCSU’s Dr. Daniel Barrett @ the Mark Twain Library on Wednesday, January 26th to examine what the noted historian has discovered exploring racism in white evangelical culture. This virtual discussion is the fourth installment in our series “Conversations: Truth, Myth & Democracy,” which is co-hosted by the Mark Twain Library and the Redding League of Women Voters.

“We are honored to host Anthea Butler for this important discussion about the history of evangelicalism and its role in maintaining the status quo,” remarked Mark Twain Library Director Erin Dummeyer. “As in all of our Conversations, we hope the knowledge she brings on this topic will further our understanding and stimulate even more open dialogue.”

Prior to hearing from Butler in person in January, Tom Kilbourn, ordained Episcopal priest and a member of the Redding League of Women Voters, will moderate a virtual discussion of Butler’s recent book, White Evangelical Racism: The Politics of Morality in America. The book has been called “cohesive and approachable” as well as “a scathing takedown of evangelicalism’s ‘racism problem.’” That virtual discussion will take place Wednesday, December 15th @ 7:30pm.

Butler is a regular commentator and columnist who is often sought out for her knowledge on race, religion, politics and gender. Her January 26th conversation will take place at 7:30pm. “The Conversations: Truth, Myth & Democracy Program” was designed to address the difficult issues of truth-telling and myth-busting within our democracy by bringing much-needed community conversations to help promote education, informed dialogue and civil discourse.

Register for both the December 15th book discussion and the January 26th conversation at: www.marktwainlibrary.org or call the Library at 203-938-2545 for information.

Dr. Butler’s book is available for purchase at Books on the Common in Ridgefield.