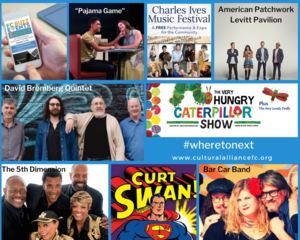 It’s the 32nd Summer Youth Theatre production of a toe-tapping, comedic love story that has delighted audiences for years. With famous hit songs like "Hey there" and "Hernando's Hideaway,” this musical tells the timeless struggle of management versus labor, with lovers from each side thrown into the mix. Running through Aug 14th.

Don't miss an opportunity to see the esteemed Grammy-nominated quartet, known for their impeccable musicianship, sophisticated artistry, and expressive performances. The group will share music by Purcell, Schubert and Schumann. Arrive early to explore the exhibition, “Women Pulling at the Threads of Social Discourse,” and to purchase delicious food and drinks on-site.

The 5th Dimension at The Ridgefield Playhouse

Legends in the house! Who doesn’t love classic songs, “Up, Up, and Away,” “One Less Bell to Answer,” “Wedding Bell Blues, and the iconic “Aquarius/Let the Sun Shine In.” Led by original member and lead vocalist, Florence LaRue, the group will share these songs and many more. With more than 20 million records sold worldwide, 22 Top 40 Hits, five #1 hits and 6 Grammy Awards, the legendary 5th Dimension continues to sell out venues and excite audiences.

Grab your shovels and sunhats and come on over to Walnut Beach in Milford for the 45th annual sand sculpture contest and create a sand sculpture as an individual or as part of a team. Judging criteria includes creativity, spirit, detail, and originality. This is not a professional or Masters level contest, but it’s one of New England’s favorite events of the summer!

The library continues its ongoing live concert series with Castlebay as they weave together nautical legacies of Maine and the British Isles, transporting you through time, and across the Atlantic. Come hear Julia Lane and Fred Gosbee blend history, legend, and experience into their traditional and original songs, with Celtic harp, 12-string guitar, fiddle, & woodwinds.

Celebrate the colorful world of Eric Carle with family-friendly, interactive puppet performances of his classic stories in the museum’s Celebration Courtyard. After the performance, snap a photo with the famous Hungry Caterpillar, make your own story-inspired puppets and art and enjoy hands-on playful learning time in the exhibits! A pasta dinner, beverages and fruit will be available for purchase in the Healthyville® Café. Advance sale tickets required.

“All of the Sky: Five Poets, Five Saturdays” at The Aldrich, Ridgefield

The Aldrich poetry series continues with a reading by Rosebud Ben-Oni. Born to a Mexican mother and Jewish father, Ben-Oni is the winner of the 2019 Alice James Award for If This Is the Age We End Discovery. In 2017, her poem “Poet Wrestling with Angels in the Dark” was commissioned by New York’s  National September 11 Memorial & Museum.

“Still Within the Sound of My Voice: The Songs of Linda Ronstadt” at Music

The David Bromberg Quintet at FTC’s The Warehouse, Fairfield

If you listened to bluegrass, folk, country, or rock music during the 1970s, it was hard to miss the songs of Bromberg. He is a godfather of Americana, a decorated multi-instrumentalist and singer-songwriter, and “an American music icon.” After fifty years, David has evolved, but is still searching, still creating, still vital, and ever humble.

“Simple Gifts” at Ridgefield Playhouse (moved indoors due to the heat)

It’s the Charles Ives Music Festival Summer 2022’s gift to the community - a free outdoor concert and community expo presented by People’s United Bank. The expo will run from 12 to 2pm and the concert from 2 to 4pm. “Simple Gifts" evokes the richness of the diversity of styles within American concert music. Performances will feature works by John Williams, Wynton Marsalis, Paul Frucht, Jared Miller, Chris Cerrone and more!

A BYO-Lawnchair Alert! As part of the ‘Music at the Barn’ Outdoor Concert Series, this band celebrates American rock & roll in its glory. Hot off the release of their second EP, “High on the Sunshine,” The Bar Car Band will bring you their signature mix of music with Joe’s Food Truck on site selling picnic food. Concert tickets online or at the door.