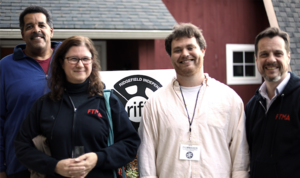 “Winning the award was a complete surprise to me. I spent around a year working on this film, and it was the first real attempt at something I wanted to showcase. I was just excited to have the opportunity to screen it at a film festival,” said Stirling. The film focuses on a man who is contemplating suicide, but after meeting his new neighbor, he falls in love and his life is reinvigorated.

Bill Harris, adjunct professor of communications and media studies and producer-in-residence, encouraged Stirling to submit his film to the festival. “The whole process was amazing. It was my first film festival as a filmmaker, and they put on a great show,” said Stirling.

Todd Barnes, artistic director of the FTMA program, described Stirling’s unique approach to his film. "Tyler pulls off the trick of being ambitious and driven while also being kind and generous. RIFF is a highly respected local festival, and Tyler's award is an honor and privilege for him and the whole FTMA program at Sacred Heart," said Barnes.

The Ridgefield Independent Film Festival screens independent films from around the world that tell inspiring stories through unique visuals. The festival takes place in Ridgefield and includes screenings, panel discussions, special events and nightly parties. A team of filmmakers selected films for screening based on their craft, creativity and storytelling.

Stirling, who is originally from Easton, earned his master’s degree from Sacred Heart University and his bachelor's from Salve Regina. He currently does freelance video work, taking his career one project at a time, and he is interested in starting a web series in the future.

As the second-largest independent Catholic university in New England, and one of the fastest-growing in the U.S., Sacred Heart University is a national leader in shaping higher education for the 21st century. SHU offers more than 80 undergraduate, graduate, doctoral and certificate programs on its Fairfield, Conn., campus. Sacred Heart also has satellites in Connecticut, Luxembourg and Ireland and offers online programs. More than 9,000 students attend the University’s eight colleges and schools: Arts & Sciences; Communication, Media & the Arts; Computer Science & Engineering; Health Professions; the Isabelle Farrington College of Education; the Jack Welch College of Business & Technology; Nursing; and St. Vincent’s College. Sacred Heart stands out from other Catholic institutions as it was established and led by laity. The contemporary Catholic university is rooted in the rich Catholic intellectual tradition and the liberal arts, and at the same time cultivates students to be forward thinkers who enact change—in their own lives, professions and in their communities. The Princeton Review includes SHU in its Best 385 Colleges–2020 Edition, “Best in the Northeast” and Best 252 Business Schools–2019 Edition. Sacred Heart is home to the award-winning, NPR-affiliated radio station, WSHU, a Division I athletics program and an impressive performing arts program that includes choir, band, dance and theater. www.sacredheart.edu