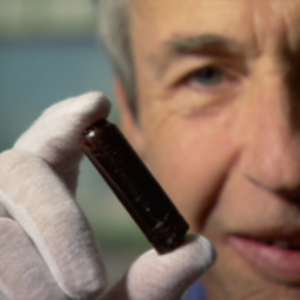 ALL THINGS BAKELITE: The Age of Plastic

In 1907, Belgian-born American chemist Leo Hendrik Baekeland made one of the most transformative discoveries of the 20th century—the first wholly synthetic plastic, which he called Bakelite. All Things Bakelite: The Age of Plastic is a joyous and provocative one-hour documentary that captures both the wonder and the curse of Baekeland’s alchemy. One of the greatest stories of science never told comes alive using re-enactments; rare archival footage and personal diaries; interviews with scientists, historians, and artists; and a highly entertaining original score. Its lively pace and quirky style appeal to anyone interested in the human drama that underlies history, science, business, and design. The film makes its public television debut on Thursday, April 4 at 8 pm on Connecticut Public Broadcasting’s Spirit Channel (DirectTV ch. 6; Frontier/FiOS TV ch. 65; Comcast ch. 298, 1161, or 966 varies by town; Charter ch. 180).

“Baekeland’s peers were the likes of Thomas Edison and Henry Ford,” notes Redding resident Hugh Karraker, a great grandson of the man who has been called the Father of Modern Plastic and executive producer and narrator for the film. “His invention had a huge impact on our lives, but little is generally known about him.” Appearing in the film, Pratt Institute professor Katarina Posch, Ph.D says it best describing Baekeland’s role in 20th Century innovation: “the heart of Bakelite is the American soul.”  The film’s 2019 release on public television stations coincides with the 110th anniversary year of the Bakelite patent.

As retired research chemist Dr. Burkard Wagner explains in the film, where other chemists found a wall in trying to figure out the reaction between Phenol and Formaldehyde, Baekeland “leaned against something that turned out to be a doorway to a wide, open world” - - his invention ushered in an explosion of new man-made materials that marked the beginnings of our modern industrial age and changed our way of life. In the film, Dr. Posch describes Bakelite as “the material of dreams,” that enabled Streamline design. The film tells Baekeland’s unique story with a style as innovative and fluid as its subject, including man-on-the-street interviews, a conga line-inspired explanation of the polymer reaction, and original songs like “Drastic Plastic.”

Beautifully realized period re-enactments of Baekeland—seen as a curious boy growing up in Ghent, Belgium, then as a persistent chemist and inventor in New York where he also invented Velox photo paper, and later as an old man reflecting on the toll that running the business of the Bakelite Corporation had taken on his life – humanize the world-circling industrial empire that resulted from the intersection of an immigrant’s dreams and his genius at chemistry and entrepreneurship. Viewers get to know a man as hard to crack as his creation, an eccentric who longed for the solitude of sailing and nature, but also found solace through his love for family, praising his more social wife Céline as his greatest discovery.

As the film reveals through painstaking research and a wide range of interviews, nothing humans have created is quite like Bakelite in its versatility and varied applications. More than a century since Baekeland found success in his lab his invention remains central to our culture, still used in hundreds of ways worldwide, from the automotive and aerospace industries to guitars that gain their unique sound from its properties, as musician Chris Davis demonstrates in the film.

While Bakelite and its descendent products are essential to our daily lives, they have also created serious environmental consequences. All Things Bakelite: The Age of Plastic confronts this double-edged sword head-on, raising an existential conflict Leo H. Baekeland himself faced as he questioned the value of his miracle material. Decades since The Graduate touted plastic as the sure thing for a secure future, an interview in the documentary with IBM Research staff chemist Jeanette Garcia, Ph.D. offers hope to offset generations of its misuse. Dr. Garcia explains research into new, recyclable polymers that still have the desirable properties of Baekeland’s original discovery without its lasting impact.

The film presents an inspiring, thought-provoking story that explores the promise and the pitfalls of genius and innovation, with the surprising twist that the nature of plastic reveals the nature of people.

Producer/Director John Maher of JEM Films is an award-winning filmmaker whose previous works include the independent documentaries, Throw It Down, A Georgetown Story, and Visions of Iron. Maher resides in Terryville, CT and was a longtime resident of Redding.   Executive Producer Hugh Karraker of Redding, CT is founder of The L.H. Baekeland Project, LLC, which promotes the history, science and art of Bakelite, and celebrates the life and achievements of his great grandfather through world-wide exhibitions and presentations. The film was edited by Craig Mikhitarian of Ridgefield, CT. The original score is by Marty Fegy of Enfield, CT.