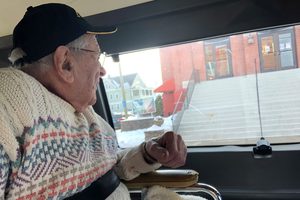 World War II paratrooper. Educator. Grandfather. Loyal friend. These are just some of the words that come up in conversations with Edward Siergiej’s friends and family.

Since August 2019, Ed Siergiej has also been a hospice patient with RVNAhealth. He has been homebound due to a hip fracture and other health issues this year that brought him back from Florida to live in Danbury with his son, Ed Jr., and daughter-in-law, Joanne. But he recently embarked on a special journey: A tour of some of the places and sights that framed his past in his hometown of Danbury.

“His desire was to revisit his early boyhood home, school and church in Danbury,” explains RVNAhealth Hospice Social Worker Cindy Merritt, LCSW. “This was about memories for both Mr. Siergiej and his family.”

The journey began on an early December afternoon when Mr. Siergiej, his son, and RVNAhealth Hospice Case Manager Kim Babson, RN, were transported by Danbury Ambulance Service to some landmark sites.

One stop was the house in downtown Danbury that Mr. Siergiej’s father built in 1925 – and where Mr. Siergiej lived until he married Mary Alma Taylor in 1954, his wife of 53 years. They also visited Sacred Heart of Jesus Parish, where he, his parents and sister had been parishioners since 1925.

“My father was president of his class at the Danbury State Teachers College in 1948,” says Ed Jr. “He later went on to graduate from WestConn’s education program, and then taught and became a school administrator on Long Island.”

The Uncle Sam statue, a 38-foot monument previously located at the Danbury State Fairgrounds, and since transported to the Danbury Railway Museum, was another destination.

“My father earned a Purple Heart and Bronze Star when he served as a paratrooper and glidertroooper in the 194th Glider Infantry Regiment of the 17th Airborne Division during World War II,” says Ed, Jr. “He is a proud military veteran, and the Danbury Fair was part of his childhood, so this statue is an important part of his past.”

Other places visited included Jimmie’s – a deli where Mr. Siergiej enjoyed coffee with friends for more than 20 years – and JK’s (famous for hot dogs).

“My father was very grateful to everyone who made this trip possible, especially his nurse, Kimmie, and Rosa Ramirez, his nursing assistant.” says Ed, Jr. “It was a highlight of the last weeks of his life.”

Made possible by the Ridgefield Thrift Shop Hospice Fund at RVNAhealth, the outing was a gift to the Siergiej family.

“Since 1937, when the Thrift Shop was created to support the work of the District Nursing Association, now RVNAhealth, we have been grateful for this partnership,” says MJ Heller, RVNAhealth director of philanthropy. “This special hospice fund, established by our Thrift Shop friends, makes wishes and memories possible for hospice patients and their families at their most vulnerable time.”