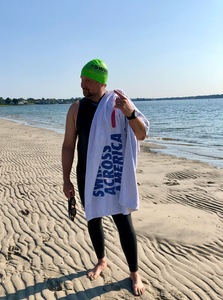 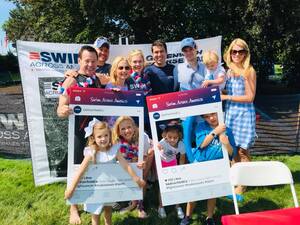 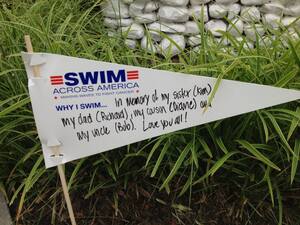 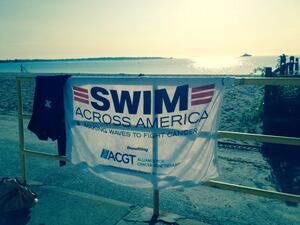 Craig has been part of the Swim Across America Fairfield County family from the very beginning. In fact, he swam in the inaugural Fairfield County charity swim in 2007 and in every swim since then. Craig swims in honor of his sister, Kimberly Lawrence Netter, who unfortunately lost her battle with breast cancer in 2001 at the age of 44. Craig will also be the event’s featured speaker on June 25th, telling his moving story about Kimberly and how she became the inspiration for the founding of the Alliance for Cancer Gene Therapy, the swim’s local Connecticut beneficiary.

When Kimberly passed away, her loss was devastating for Craig and his family. Kim’s father-in-law and mother-in-law, Edward and Barbara Netter of Greenwich, Connecticut, were also profoundly impacted by her passing and motivated by the brutal treatment she endured to find a better ways to treat cancer. The Netter’s were inspired by news they were hearing in the gene therapy field. In 2001, after Kimberly’s passing, the Netter’s founded Alliance for Cancer Gene Therapy (ACGT), which is focused on harnessing the power of cell and gene therapies to equip the immune system to destroy cancer cells without harming healthy tissue.

“When Alliance for Cancer Gene Therapy and Swim Across America partnered in 2007, I was an avid swimmer and triathlete and knew that I had to get involved,” said Craig Lawrence. “It was just something very personal that I could do to express the love and support that my sister had always shown to me, but I also knew that the collaboration would produce great results in the battle against cancer.”

Unfortunately, Craig’s family has had numerous other cancer diagnoses that continue to push him to participate – his father Richard Lawrence, Kim’s father-in-law Edward Netter, cousin Diane Darst and uncle Bob Wassman, have all bravely fought and lost their lives to cancer.

For the past 16 years, Craig has gotten into the water and swam three miles to honor their memory and help fund the development of new, innovative cancer treatments, raising over $25,000. In 2021, Craig was joined by his 13 year-old son Graham and the two together made waves to fight cancer.

“I’m incredibly proud to have played a role in helping the Alliance for Cancer Gene Therapy fund researchers who have made tremendous advances in the development of cell and gene therapies across multiple cancer types over the past decade. I will continue to swim and support their efforts until cancer becomes a disease of the past,” noted Craig.

Funds raised by Swim Across America Fairfield County go directly to support scientific cancer gene therapy grants administered by the Alliance for Cancer Gene Therapy. Swim Across America Fairfield County has specifically raised $4.7 million over the past 15 years. This year’s Alliance for Cancer Gene Therapy research fellow funded by Swim Across America Fairfield County is Brian Brown, PhD., professor of Genetics and Genomic Sciences and associate director of the Precision Immunology Institute at the Icahn School of Medicine at Mount Sinai (New York). Dr. Brown’s research is working to identify the factors that control immunity and tolerance, and translate these findings into strategies that can be used to turn the immune system against cancer or viruses, working toward a potential breakthrough in the fight against solid tumors. Despite some amazing successes, not all patients respond to current immunotherapies and Dr. Brown thinks he and his team have identified a cell type responsible for poor responses.

Swim Across America’s funding of clinical trials on a national level has helped contribute to four FDA approved life-saving immunotherapy cancer treatments: Yervoy, Opdivo, Tecentriq and Keytruda. Just this month, very exciting news about a clinical trial at Memorial Sloan Kettering was published in The New England Journal of Medicine that showed a 100 percent success rate in treating patients in a phase 2 clinical trial for advanced rectal cancer with dostarlimab, an immunotherapy treatment produced by GlaxoSmithKline. The clinical trial at Memorial Sloan Kettering was funded by early-stage grant funding from Swim Across America.

While Swim Across America is a national organization and offers open water and pool swims in 24 communities, from Boston Harbor to under the Golden Gate Bridge, its roots are firmly anchored along the shores of Connecticut. Darien, Connecticut, resident Matt Vossler and his lifelong friend and college roommate Jeff Keith founded Swim Across America in 1987 swimming the first open water event in Long Island Sound. That swim featured a sunken boat, but the organization, throughout its 35 years, has gone on to raise more than $100 million in the fight against cancer. More than 120 Olympians support Swim Across America, including Michael Phelps, Craig Beardsley (who is being inducted into the International Swimmer’s Hall of Fame this fall), Donna De Varona (a Greenwich resident and honorary Fairfield County co-chair), Rowdy Gaines, Janel Jorgensen McArdle (who grew up in Ridgefield, Connecticut), Bobby Hackett, Ryan Lochte, Glenn Mills, Cristina Teuscher (who participates in the Fairfield County event) and many more.

To learn more about Swim Across America Fairfield County or to register to swim, volunteer or donate for the June 25th open water swim, visit swimacrossamerica.org/fc.