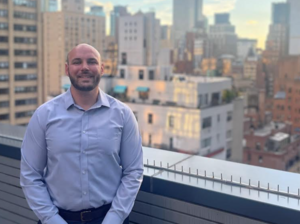 Luke Holden stepped out onto the rooftop balcony of his Midtown Manhattan apartment near Grand Central Terminal recently and pointed toward the sun as it set behind the Empire State Building. “WCSU gave me the tools to come down here and succeed,” he said. “I love living in New York City.”

A little more than a decade earlier, as a student at Joel Barlow High School in Redding, Holden knew that after his June 2011 graduation, he wanted to go to Western Connecticut State University. He enrolled as a Managerial Accounting major and settled into Litchfield Hall his freshman year, eager to begin his WCSU journey.

Once on campus, he became actively involved in “the full college experience,” even joining the football team as a walk-on for two years. “My time with the team created close friendships that I still have to this day,” Holden said, sharing that he recently was a groomsman in a former teammate’s wedding.

Reflecting on the first business class he took in the Westside Classroom Building, Holden said, “First, it’s daunting just to figure out how to get around the building; then it’s challenging to get the degree.”

The challenge was mitigated by faculty members like Professor of Accounting Thomas Monks, Holden’s Ancell School of Business adviser. “He busted my chops a lot, but got me ready for the real world,” Holden said. “Another thing that separated me from other job candidates upon graduation was my ability to adapt, because at the Ancell School I learned accounting, fraud, business development and marketing as part of my Managerial Accounting degree.”

Holden also took full advantage of WCSU’s Career Success Center, attending Career Fairs and making as many industry connections as he could. After graduation, he worked at a sales company in White Plains developing his business communication skills and building contacts in the construction industry in Manhattan. When he applied for an assistant project accountant position at AECOM Tishman, one of the leading construction management firms in the United States and the largest in New York City, he got the job.

“The wide spectrum of business courses I took at WCSU helped my overall, broad business knowledge, and led to my hiring as a project assistant for the World Trade Center construction,” Holden said. Within two years, he was running the project in a senior accounting role responsible for cost reports, budgets and more. Now, six years after becoming a WCSU alumnus, he has joined Pavarini McGovern, another prominent New York-based construction management firm, as a project accountant.

“I have coworkers who walk around in their Columbia and Cornell polo shirts, and I am just as proud to be from WCSU and the Ancell School of Business,” Holden said. “WCSU may not be an Ivy League school, but it prepares you in such a way that you have the ability to succeed. As a student, I worked two jobs and often took evening classes. I loved the flexibility and the ability to meet older students in night classes. You obtain the knowledge and the work ethic at WCSU and apply it in the real world.

“All of my experiences at WCSU were so great, and the quality of education that you get is so much better than what you pay for,” Holden continued. “Many of my coworkers have debt, and I don’t. In addition to the cost-effectiveness of my degree, there are also the lifelong friendships and connections that I made.”

Stopping for a moment to appreciate his view, Holden added, “I didn’t do this alone. It feels like there were a million people behind me at WCSU, helping me succeed.”