Guys and Dolls at ACT of CT, Meet the Local Stars: Matt Faucher 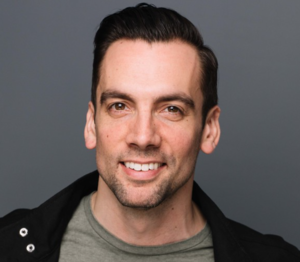 A: I was born and raised in CT. Born in Bristol, where most of my family still lives. Found my love of theatre, living in New Hartford whilst attending Northwestern Regional #7 in Winsted, under the guidance of Les Ober. I graduated from Hartt School of Theatre. CT is where my heart is.

Q: You have such an impressive resume (including performing on Broadway in Beautiful: The Carole King Musical as well as touring with Jersey Boys). How does performing at a regional theater (like ACT of CT) compare to working on Broadway?

A: Broadway is undoubtedly the Mecca of the American Theatre, but great work can happen anywhere. Some of my most satisfying artistic journeys and proudest theatrical achievements have happened in regional theatre. Winning the CT Critics Circle Award for my work as Jud Fry in the Goodspeed Musicals production Oklahoma! is one such highlight. When storytellers come together with a shared purpose and artistic vision, it will be not only entertaining for the audience but also satisfying for the artist involved. This rare but beautiful craft can happen any place where truthful dynamic storytelling is paramount. I believe ACT of CT is one such place, and I am very excited to get Guys and Dolls up and running!

Q:  Why are regional theaters (like ACT of CT) so very important?

A: Regional theatre is the lifeblood of the theatrical arts across the country. Sometimes, a local regional theatre will be the only venue in which to enjoy the magical storytelling of the stage. CT is quite lucky to be blessed with so many high-caliber, award-winning Regional theatres such as Hartford Stage, Long Wharf, Goodspeed Musicals, and of course ACT of CT. They have been, historically, the testing ground for many of our great new works, and torch bearers of classic shows like Guys and Dolls. Regional theatres should be supported and celebrated for the bastions of the arts that they are.