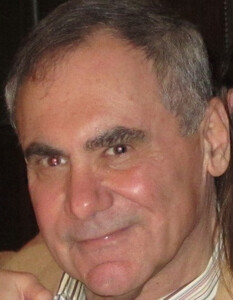 Balint John "Bill" Soltesz, 75, passed away peacefully on November 26th, at Danbury Hospital after a long illness, with his wife Joan at his side. Bill was born in Bridgeport, CT August 20, 1947, the son of the late Balint and Mary (Ciaffone) Soltesz.

Bill grew up in Fairfield and graduated from Roger Ludlowe High School. A first-generation college graduate, he worked throughout his college years to finance 100% of his tuition and expenses. He earned a BS in Marketing from Central Connecticut State University, and his MS in Guidance from the University of Bridgeport. After a brief period as a high school teacher, he had a distinguished 40-year career in Human Resources with SVG Lithography, Bayer, Pfizer, and Save the Children.

Bill’s greatest source of joy was his family. He and Joan raised their children in Redding where he coached little league, and actively supported the Mark Twain Library, New Pond Farm, and all his children’s sports teams and activities. In later years, he became a huge fan of the College of Holy Cross and wore his “Holy Cross Dad” hat with love and great pride. An avid history buff of World War II and the Vietnam War, he was an excellent example of a life-time learner.

He will be lovingly missed by his wife Joan, daughter Elizabeth (William) Twersky, grandson Jack Soltesz Twersky, many brothers and sisters in law and nieces and nephews. Bill was predeceased by his parents, his sister Deborah, and his beloved son William (Billy).

A funeral mass will be celebrated on Wednesday, December 7, 2022, at 10:00 AM at Saint Mary's Church; 55 Catoonah Street, Ridgefield. Interment will take place privately; there will be no calling hours. Memorial contributions may be made in Bill’s name to New Pond Farm Education Center, 101 Marchant Road, Redding CT 06896; http://newpondfarm.org.

Kane Funeral Home, Ridgefield is in care of arrangements.