Details
Published on Wednesday, 26 May 2021 09:56
Written by State Senator Will Haskell 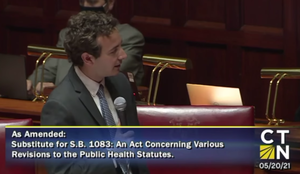 In early April, Public Health Bill SB-1083, written by Senator Will Haskell and State Representative Aimee Berger-Girvalo, was brought before the senate.

Courageously advocating for the bill was Ridgefield resident Suzanne Brennan who lost her husband, the father to three children when he waited for EMS at a local health club.  Brennan explains, "There was no one at the gym to help him. For every minute that passes, the chance of survival drops 7-10% following a sudden cardiac event."

We learned today from Senator Will Haskell that the bill, requiring health clubs and athletic facilities to maintain an AED and a trained staff person on site, passed!

Making the bill a reality, was a journey recounted by Senator Will Haskell. Here, he explains:

A few months ago, I got a call from a constituent in Ridgefield named Suzanne Brennan.

Suzanne shared her family's story, recounting the tragic loss of her husband due to a cardiac incident. He was working out at a gym at the time, a place where people are statistically more likely to experience heart issues. Although an AED would have likely saved his life, there was no such device on site. Oddly, we require AEDs in schools and golf courses, but not gyms or health clubs.

State Representative Aimee Berger-Girvalo and I wrote a bill to change that, and I’m so pleased that SB 1083 passed the Senate last week.

This legislation is about saving lives and preventing future tragedies, and I'm so grateful that Suzanne reached out with this smart idea.

Read more about Public Health Bill SB-1083 here.
Thank you to Senator Will Haskell and State Rep Aimee Berger-Girvalo for keeping Connecticut's gyms safer places for all.
You can watch Senator Will Haskell fighting for this bill to be passed by visiting his Facebook page here.